When Congress member Jairam Ramesh asked about the time- line for the merger, he said: "I dont  know yet". 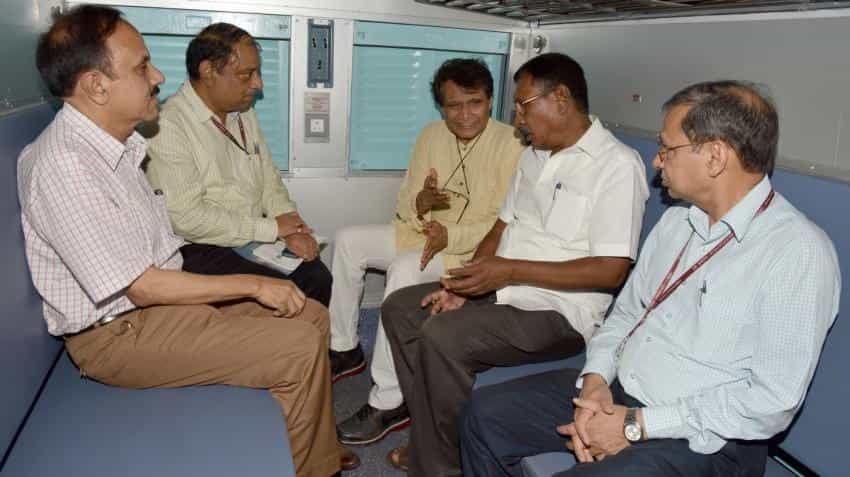 The Railways require huge investment for its survival as the department has a huge burden of 7th Pay Commission. Photo: IANS
Written By: PTI
RELATED NEWS

The Railway Budget should be merged with the General Budget for the long term interest of national transporter as well as the country's economy, Railways Minister Suresh Prabhu said in Rajya Sabha on Tuesday.

He said he has written to Finance Minister Arun Jaitley in this regard. "As far as Railway Budget is concerned... I have written a letter personally to the Finance Minister saying we are willing for merger (of Railway Budget with the General Budget). In fact, I had suggested even last year. So it's not that I want to just present a budget. I am looking at a national interest," he said.

The merger should happen in such a way that Railways become a part of overall Budget and the capex, revenue deficit all of this can be taken care of, Prabhu said.
"So this is something which should happen keeping in the long term interest of Railways and Indian economy," he added.

When Congress member Jairam Ramesh asked about the time- line for the merger, he said: "I dont know yet".

Prabhu was replying to a resolution to approve certain recommendations contained in the first report of Railway Convention Committee 2014, which was appointed to review the rate of dividend payable by the Railway Undertaking to general revenues and other ancillary matters.

The resolution was approved by the House by voice vote. The minister said Railways has the potential to contribute around 2-2.5 per cent of the GDP but for that it needs investment.

The Railways require huge investment for its survival as the department has a huge burden of 7th Pay Commission of about Rs 30,000-40,000 crore alone being the largest employer in addition to the subsidy burden of Rs 34,000 crore, he said.

On the dividend payout, Prabhu said the Railways has increased the planned capex to Rs 8.5 lakh crore for the next five years. The minister said that all the committees, including Parliamentary Standing Committee, have suggested that the dividend should not be paid.

"My request would be if at all we agree that we have to go with the recommendation of the committee, then at least I would request to postpone the liability of paying dividend by 4-5 years," Prabhu said, adding that this would give Railways a leeway to use this amount for capex.

Prabhu said he would take up this matter separately with the Finance Minister.