The mega Kumbh Mela, which began on January 15 and will continue till March 4, is expected to generate a revenue of Rs 1.2 lakh crore for Uttar Pradesh, says apex industry body Confederation of Indian Industry. 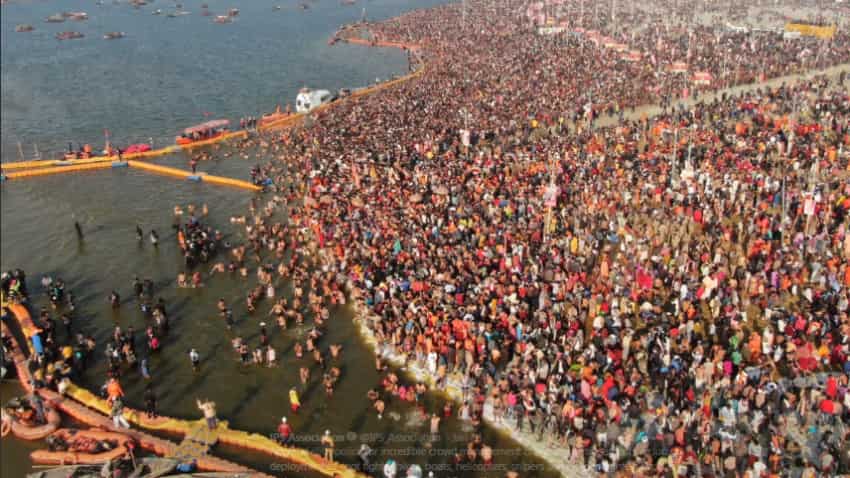 The Uttar Pradesh government has allocated Rs 4,200 crore for the 50-day Kumbh Mela this time, which is over thrice the budget of the Maha Kumbh in 2013. Image source: Twitter
Written By: ZeeBiz WebTeam
RELATED NEWS

Uttarakhand Schools Latest News: Schools in Haridwar closed from TODAY till THIS DATE

The mega Kumbh Mela, which began on January 15 and will continue till March 4, is expected to generate a revenue of Rs 1.2 lakh crore for Uttar Pradesh, says apex industry body Confederation of Indian Industry. Although the Kumbh Mela is spiritual and religious in nature, the economic activities associated with it generate employment for over six lakh workers across various sectors, CII said in a report.

The Uttar Pradesh government has allocated Rs 4,200 crore for the 50-day Kumbh Mela this time, which is over thrice the budget of the Maha Kumbh in 2013, making the mega pilgrimage perhaps the costliest ever. The hospitality sector aims at employing 2,50,000 people, airlines and airports around 1,50,000 and tour operators around 45,000. The employment numbers in eco-tourism and medical tourism are being estimated at 85,000, says a CII study.

Apart from this there will be around 55,000 new jobs in the unorganized sector comprising of tour guides, taxi drivers, interpreters, volunteers etc.  This will lead to increase income levels for government agencies and individual traders.  Attracting a massive number of foreign tourists from various countries like Australia, UK, Canada, Malaysia, Singapore, South Africa, New Zealand, Mauritius, Zimbabwe and Sri Lanka, the Kumbh is a festival of the world.

"The 'mela' is expected to generate a revenue of Rs1,200 billion for Uttar Pradesh, the state where it is being held, while neighbouring states like Rajasthan, Uttarkhand, Punjab and Himachal Pradesh will also benefit from the enhanced revenue generation with a large number of national and foreign tourists expected to explore other destinations.

The area of Kumbh Mela has also been doubled to 3,200 hectares as compared to 1,600 hectares in the previous melas. The Kumbh is a unique and massive gathering of both rural and urban population and also has a huge dispersal factor as people travel long distances across the country. In order to house this multitude, authorities have erected a mini-city of more than 4,000 tents. The city is being lit by installing over 40,000 LED lights, say local authorities.

Overhauling of key infrastructure is being done, including upgrading nine railways stations and construction of a new airport terminal in Allahabad. The setting up of this new city in the huge Mela area involves 250 km roads and 22 pontoon bridges, which will make it the largest temporary city in the world. The Kumbh, a sacred Hindu pilgrimage, is thus expected to generate direct and indirect business activities, the fruits of which would hopefully benefit the economy not only of Uttar Pradesh, but that of India as a whole, the CII document says.

The Kumbh at Sangam city Prayagraj, as Allahabad is now known, dates back to a hoary past, whose first mention of was made some 2,000 years ago by the Chinese traveler Hsuan Tsang who visited India during the reign on King Harshvardhana. Based on a complex astrological calculation, the alignment of the stars determines the time and place of the Kumbh' in one of the following four river-sites: Haridwar, Prayagraj, Nasik and Ujjain.

It is a celebration of an ancient tradition a dip in the holy waters where the mythical Saraswati, Ganga and Yamuna meet. These riverside festivals and the city that springs up around them are attended by millions, making the Kumbh Mela' the largest religious gathering, perhaps the oldest, and the largest temporary city in the world.

Learned seers believe that a dip in the waters would endow an individual with religious merit.  Masses of devotees gather on the riverbank to attain spiritual enlightenment, some in the belief that doing so will lead them worldly success, others simply to purify their souls. The Kumbh Mela gets its worldwide reputation as a mega-event not only because of the sheer number of people who attend the fair but also for a widespread display of cultural traits of a nation, which is bound by ties of faith and traditions.

Around 12 crore people are expected to visit the Kumbh between now and Maha Shivratri on March 4, when the Mela will come to a close on Maha Shivratri day. The first "Shahi Snan' (royal bath) of Kumbh on January 15 drew a record crowd of 2.25 devotees, said Uttar Pradesh Chief Minister Yogi Adityanath, who has been meticulously supervising minute details personally to make the event "Divya Kumbh, Bhavya Kumbh".

Uttarakhand Schools Latest News: Schools in Haridwar closed from TODAY till THIS DATE