August futures expired on Thursday on a quiet note. While the month or the series saw gains of 457.10 points or 4.12 per cent, Thursday itself was a quiet day and NIFTY gained under 10 points. This is the third consecutive month of gains for the indices. 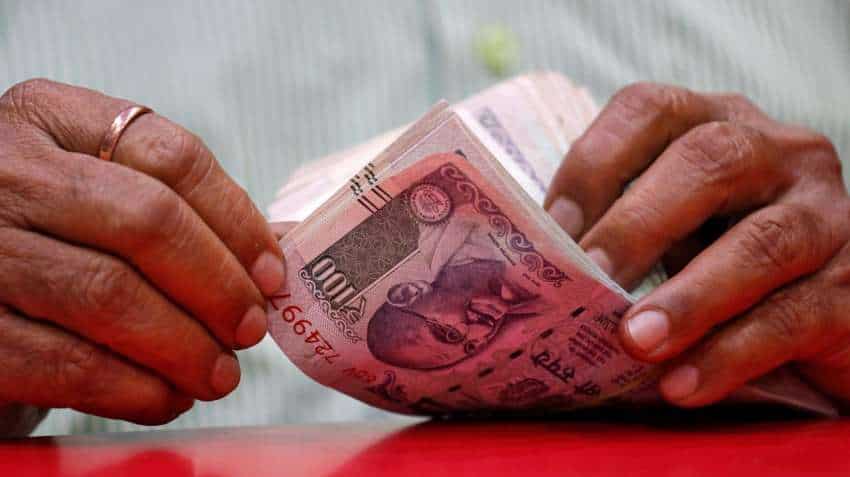 Indian rupee registered sharp gains against the US Dollar and was up Rs 1.46 or 1.95 per cent at Rs 73.38 to the dollar. Photo: Reuters
Written By: IANS
RELATED NEWS

August futures expired on Thursday on a quiet note. While the month or the series saw gains of 457.10 points or 4.12 per cent, Thursday itself was a quiet day and NIFTY gained under 10 points. This is the third consecutive month of gains for the indices.

The FUTURE group has signed a massive deal with Reliance Industries which involves a complex merger and demerger of group companies The deal envisages all the group companies merging into FEL or Future Enterprises Limited in which Reliance would acquire 67.98 crore shares (Rs 2 face value) at a price of Rs 17.65. They would also be allotted 90.65 crore warrants of the same company at the same price. This would give them a minority stake of 13.14 per cent in the combined entity. This would comprise of 6.09 per cent by way of equity and 7.05 per cent by way of warrants to be exercised within 18 months.

Reliance would acquire all the businesses of the group other than the manufacturing and distribution of FMCG goods and integrated fashion sourcing and manufacturing business. The insurance JV with Generali and the JV with NTC mills will be the business which would also remain with the holding company FEL. All other companies like Future Consumer, Future Lifestyle Fashions, Future Market Networks, Future Supply Chain Solutions and Future Retail would see their present shareholders get shares in exchange for shares of FEL or Future Enterprises Limited. They will not get anything in Reliance Retail Limited.

The share swap ratio as given in the composite scheme based on closing prices of Friday entails profits of between 36.43 per cent for shareholders of Future Market Networks to 75.18 per cent for Future Supply Chain Solutions. There would be plenty of action in the above group of shares but one wonders how markets would react a couple of days later when it is realised that the holding company or de-facto resultant or residual company is left with insignificant business should be valued on what parameters. All the brands currently owned by the future group would be sold on a slump sale basis to Reliance.

SEBI is having a meeting with members of the broking community to sort out the last mile connectivity issue for pledge creation of shares and would probably allow a small extension of say a fortnight to get things going before the new margin rules kick in. What this would do to the market in terms of trading volumes in the cash segment is to be observed in the coming days once the same is introduced. One thing though is certain that a popular product known as `BTST`, buy today and sell tomorrow would see the end of its existence. This product which entails buying shares on day one and then selling on day two is very popular with retail investors/punters. There are programs on the electronic channels as well who make calls directly or through guests promoting such trading. All of this would become a thing of the past. Why? This would now entail paying the full value of shares purchased at end of day one and then entail payment of margin on the sale component on day two. Further the credit of sales made on day two would be available only when pay-out is declared of the same on day four. Till then the value is blocked.

Let`s explain by an example. Shares worth Rs 10,000 are bought on Monday. Margin of 30 per cent approximately is required when the purchase is made and balance required before trading begins on day 2 or Tuesday. On Tuesday the goods are sold, hence margin on sales of Rs 10,000 at Rs 3,000 is required. The pay-out of the same would be available only on Thursday when the sale value of Rs 10,000 and the margin of Rs 3,000 paid is released. Theoretically the margin of Rs 3,000 on sales could be released a day earlier on Wednesday when the delivery of shares bought on Monday is received. The point being made here is that brokers earlier would adjust the purchase with the sales and allow further trading. Hereon the cycle would become effectively four days against one and a half day earlier and involve much more money to be available upfront.

In the case of derivatives whether it be futures or options, once the trade is squared off, the margin is available immediately as trades normally do not result in delivery. In the cash market the same would happen in case of intra-day trades but would be different in case of deliveries. This would ensure lower deliveries, lower volumes and the possibility that some percentage of trading community shifts from cash market to the riskier derivative or futures segment.

Coming to the markets, they appear set to reach or see a blow-off before the current rally ends. The blow off could be a couple of days away or longer, say 8-10 trading days away. What would precede that is huge volatility, spurt in volumes and wild intra-day gyrations. The strategy would be to continue to ride the rally but be careful in pre-empting the imminent fall and avoiding any shorts till the event actually begins. The correction while it would be swift would take some time to happen and not get over in a jiffy. Enjoy the rally till the blowoff actually happens.