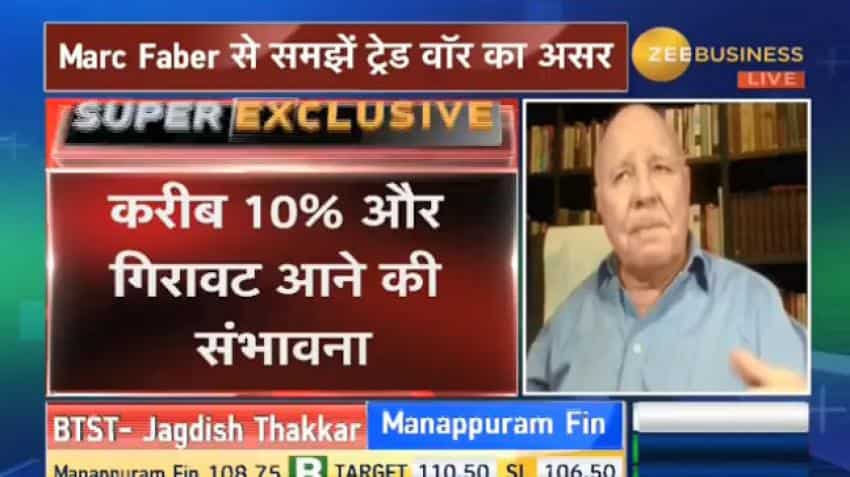 In an exclusive interview to Zee Business today, famous Swiss investor Marc Faber said that the Sensex can still fall over 20 per cent, slipping below the 30,000 mark. Dr Doom, as Faber is popularly known, is however, very much optimistic about India, but not about Indian stock markets. The Gloom Boom Doom famed author doesn’t expect much upside on frontline index and the reason is on account of high valuations. Nevertheless, he does see strong stock-specific potential. Here are edited excerpts of the interview today:

Do you think this is the start of a bear market or is the correction done?

In the short-term, we are somewhat oversold, but from the longer-term perspective, we’re nowhere near oversold. We are just down 10 per cent from the recent peak, which is nothing in a bull market. Another important factor to look at is when the market went down recently, retail investors turned out to be the net buyers of equities, which is why I believe negative sentiment has not yet taken place. I think the market still has at least another 10% downside risk, which is the case in India too. But, the problem in US is that if US markets drop by 10 per cent, it could very well drop another 40 per cent because as the markets go down, earnings disappoint, and fundamentals don’t look that great.

What are the triggers that may pull the markets higher?

If you look at last 100 years or so, the markets have been on upside with the inflation being the system, and the level of credit rising steadily. Money supply has been growing rather strongly in the last 10-12 years. The expansion of central bank balance sheet has been very high. So, there were reasons for markets to go higher.

The probability of market falling 20-25 per cent is very high, around 90 per cent. We have gone up in straight line beginning from 2016. We have not had more than 3 per cent correction in S&P at a given point.

If S&P falls 25 per cent, what would it mean for Indian markets?

Around the world, the stock markets pretty much revolve around S&P. If S&P falls 10 per cent in one week, the likelihood of other markets going down also gets very high because fund managers in US now invest internationally. After a fall in US markets, they start selling elsewhere too to rebalance their portfolios. Same happens with index funds too.

So, although I’m optimistic about India in the long-run, but some conditions would have to be met, for example, less bureaucracy and more institutionalized and professional government. I’m bullish on India, but not on Indian stock market. A 20 per cent correction in Sensex would not be unusual.

Would you say that Indian markets are more vulnerable to correction than other emerging markets?

Not really! The Indian economy is relatively stable economy that doesn’t depend much on exports. I think problem for India is if other markets go down, it will be dragged down too. Secondly, the political situation is not so great here. The perception among large foreign investors is that political situation in India is still unstable. Lastly, Indian stock market consist of large number of shares and some of these shares are very expensive, trading at 45 to 60 times their earnings. I don’t see these stocks rising much from these levels, but there are few stocks which still hold upside potential. So, from the stock-specific perspective, India will do okay, but index won’t do that well because index consists of stocks with high market capitalization.