Clad in a maroon saree with a fierce look on her face, Tandon, introduces herself as  'The Gavel to Brutality' in her Instagram post 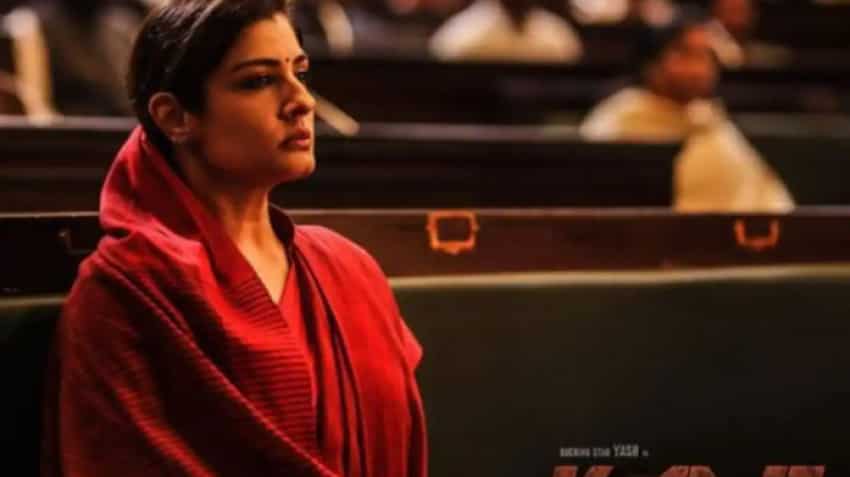 After Sanjay Dutt, the makers of KGF: Chapter 2 have unveiled poster of Raveena Tandon as Ramika Sen today. Clad in a maroon saree with a fierce look on her face, Tandon, introduces herself as  'The Gavel to Brutality' in her Instagram post. She shared the poster and wrote, “THE gavel to brutality!!! Presenting #RamikaSen from #KGFChapter2. Thanks KGF team for the gift. (sic)”

Raveena plays an important role in KGF: Chapter 2, which follows the story of Rocky (Yash), who rises from poverty to become the controller of a gold mine.

As per the poster, sitting on a bench with authority and power, it looks like Raveena plays the role of a powerful politician.

Yash is currently shooting for the film in Bengaluru. The first part’s narrative follows an underdog who later becomes a dangerous gangster. The upcoming sequel is said to follow the power struggle between Rocky (Yash) and Adheera (Sanjay) and Raveena Tandon.
Helmed by Prashanth Neel, the film will also feature Srinidhi Shetty in a lead role. The first installment of the film was also directed by Neel. The upcoming film will release in multiple languages.
The film also marks Sanjay Dutt’s Kannada debut. The actor recently announced that he has won the battle against lung cancer. He will begin shooting of the film in November.
See Zee Business Live TV Streaming Below:

Earlier, KGF: Chapter 2 was slated to hit the theatres on October 23 but due to the COVID-19 pandemic, the film was indefinitely postponed.