Modi will also dedicate the doubling of 14.273 km of Barpali-Dungaripali and 17.354 km Balangir-Deogaon road lines, completed at a cost of Rs 189.3 crore. It forms a part of the 181.54 KM Sambalpur-Titlagarh doubling project. 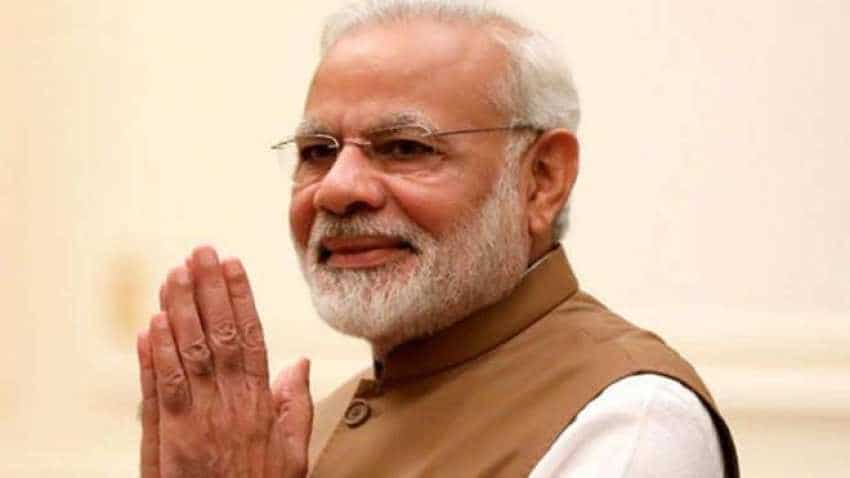 Modi's visits to the state in quick succession assume significance as Assembly election in the state is slated to be held together with the upcoming Lok Sabha polls.Reuters

Prime Minister Narendra Modi is set to launch a slew of centrally funded projects worth over Rs 1,545 crore in Odisha during his third visit in last three weeks to the state on Tuesday, official sources said.
Modi, who toured Bhubaneswar and Khurda on December 24 and Baripada in January first week, will visit Balangir, where he is scheduled to address a rally, besides inaugurating and laying a foundation of the development projects, mostly in the railway sector, they said.

On December 24, the prime minister had launched Rs 14,523 crore worth of projects for Odisha, while on January 5, he unveiled programmes worth Rs 4,733 crore, taking the total value to Rs 20,801 crore in the past month, officials said.

Modi's visits to the state in quick succession assume significance as Assembly election in the state is slated to be held together with the upcoming Lok Sabha polls.

Two days after Modi's rally in Balangir, BJP president Amit Shah is slated to visit Odisha on January 18 when he will meet booth-level workers in Cuttack, a senior BJP leader said.

The back-to-back visit by the top BJP brass shows the party's efforts to take on the ruling BJD, which has been in power in the state since 2000.

Shah has set an ambitious target for the BJP to win at least 120 of the 147 Assembly seats in the state. The saffron party had won 10 assembly seats and one of the 21 Lok Sabha seats in 2014.

During his Balangir visit on Tuesday, the prime minister will dedicate to the nation electrification of Jharsuguda-Vizinagaram and Sambalpur-Angul lines, spanning 813 km, completed at a cost of Rs 1085 crore.

The project will ensure seamless rail connectivity on the line and reduce running time, a senior railway official said. It will also reduce diesel consumption and lead to reduction of Green House Gas emissions.

Modi will also dedicate the doubling of 14.273 km of Barpali-Dungaripali and 17.354 km Balangir-Deogaon road lines, completed at a cost of Rs 189.3 crore. It forms a part of the 181.54 KM Sambalpur-Titlagarh doubling project.

Among other railway projects, he will dedicate a Multi-Modal Logistics Park (MMLP) at Jharsuguda, built at a cost of Rs 100 crore.

Spread over an area of 28.3 acre, the MMLP is situated adjacent to the main line of Howrah-Mumbai, 5km from Jharsuguda Railway station.

A number of industries, such as cement, paper, aluminum, refractory, pig iron, sponge iron, steel pipe, located in and around the catchment area will benefit from this facility, he said.

The PM will also inaugurate 15 km Balangir-Bichhupali new railway line built at a cost of Rs 115 crore. It is a part of the new 289-km Balangir-Khurda road line which connects to Howrah-Chennai main line on Khurdha roadside and Titlagarh- Sambalpur line at Balangir.

Once completed, the line would connect coastal Odisha with western region through Sonepur, Boudh, Puranakatak, Daspalla and Nayagarh, synchronising development across the state.

The line would also benefit many MSME and cottage industries and open up opportunities for the mining sector.

He will flag off a new train on Balangir-Bichhupali route which would benefit commuters in the region, besides connecting Bichhupali to Jharsuguda and Vizianagaram main line through Balangir.

A bridge between Theruvali and Singapur road station, commissioned at a cost of Rs 27.4 crore, will be inaugurated on the occasion. It will rebuild the linkage over Nagavali river, washed away during floods in July 2017, he said.

These apart, Modi will inaugurate renovation and restoration works at Nilamadhav & Siddheswar Temple at Gandhaharadi in Boudh, Paschim Somnath group of temples, also in Boudh, and Ranipur Jharial group of monuments in Balangir, said an official of the Archaeological Survey of India (ASI).

In addition, he is slated to lay the foundation stone for a permanent building at Kendriya Vidyalaya, Sonepur, to be constructed with an investment of Rs 15.81 crore.