Gokhale said the Chinese President had told Modi that his country invites Indian investments in pharmaceutical and information technology sectors, and also assured Modi that India`s concern on trade issues will be taken into account. 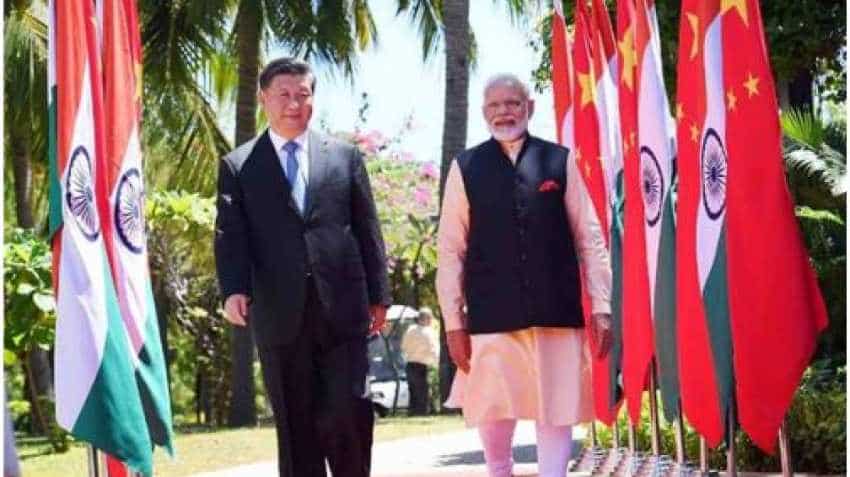 Modi and Xi recognized that India and China have a common interest in preserving and advancing a rules-based and inclusive international order. Image source: IANS
Written By: ZeeBiz WebTeam
Edited By: Arun Kumar Chaubey

India and China will set up a High-Level Economic and Trade Dialogue mechanism to deepen economic cooperation and also sort out the concerns pertaining to the bilateral trade issues, said Indian Foreign Secretary Vijay Gokhale. He also said official level actions will be taken in both the countries in less than a year to fructify the decisions taken at the two informal India-China Summits held till now.

Briefing the media on the decisions taken at the Second Informal India-China meet held in Mahabalipuram, between Prime Minister Narendra Modi and Chinese President Xi Jinping on October 11-12, Gokhale said the two leaders have decided to set up a new elevated mechanism represented by the Finance Minister and the Chinese Vice Premier as members to discuss on how to reduce the trade deficit, improving bilateral investments and manufacturing. The bilateral trade between India and China is about $87 billion.

Gokhale said the Chinese President had told Modi that his country invites Indian investments in pharmaceutical and information technology sectors, and also assured Modi that India`s concern on trade issues will be taken into account. Modi and Xi recognized that India and China have a common interest in preserving and advancing a rules-based and inclusive international order, including through reforms that reflect the new realities of the 21st Century.

Both agreed that it is important to support and strengthen the rules-based multilateral trading system at a time when globally agreed trade practices and norms are being selectively questioned. India and China will continue to work together for open and inclusive trade arrangements that will benefit all countries.

When asked about the US-China trade war and India-China trade Gokhale said the two has not direct relationship, Gokhale said there is significant market in China for Indian companies and vice versa. On the climate change, Modi and Xi underscored the important efforts being made in their respective countries to address global developmental challenges, including climate change and the Sustainable Development Goals.

Gokhale said the issue of Kashmir was not discussed by Modi and Xi during their discussions and India is clear that it is an internal affair. The Foreign Secretary also said the two leaders agreed that radicalization is of mutual concern but there was no specific discussion on terror.

Gokhale said both Modi and Xi are concerned that terrorism. As countries that are large and diverse, they recognized the importance of continuing to make joint efforts to ensure that the international community strengthens the framework against training, financing and supporting terrorist groups throughout the world and on a non-discriminatory basis.

The two leaders also agreed on the importance of concluding negotiations for a mutually-beneficial and balanced Regional Comprehensive Economic Partnership.

According Gokhale, Modi and Xi exchanged views on the age-old commercial linkages and people-to-people contacts between India and China in the past two millennia, including significant maritime contacts.

They also agreed on establishment of sister-state relations between Tamil Nadu and Fujian Province, exploring the possibility of establishing an academy to study links between Mahabalipuram and Fujian province on the lines of the experience between Ajanta and Dunhuang and conducting research on maritime links between China and India in view of our extensive contacts over the centuries.

On the timeframe for the officials of the both the nations to actualise the decisions taken at the informal summit Gokhale said it will be done in less than a year.

He said Xi was satisfied with the results of such informal summits and had invited Modi to China for the third one. Modi has accepted the invitation and the dates for the same will have be finalised.

Prime Minister Narendra Modi gifted Chinese President Xi Jinping a hand-woven portrait in fine red silk of the latter, at the end of their two-day informal summit. The portrait was created by weavers of Sri Ramalinga Sowdambigai Handloom Weavers Co-operative Society in Sirumugaipudur in Coimbatore district.

Modi and Xi held aloft the two sides of the red and gold silk portrait and posed for photographers. Earlier, Modi took Xi around an exhibition of artefacts and handloom at the Taj Fisherman`s Cove hotel where the summit was held.

Earlier, in his remarks at the opening of the talks, Xi had said his visit to Mahabalipuram is a "memorable experience" and would have "far reaching impact" for the Chinese people.

Prime Minister Narendra Modi and Chinese President Xi Jinping have decided to designate 2020 as the `Year of India-China Cultural and People to People Exchanges`.

A statement issued by Ministry of External Affairs (MEA) said: "They also agreed that the 70th anniversary of the establishment of India-China relations in 2020 will be fully utilized to deepen exchanges at all levels including between their respective legislatures, political parties, cultural and youth organisations and militaries."

According to the MEA, to celebrate the 70th anniversary of diplomatic relations the two countries will organise 70 activities including a conference on a ship voyage that will trace the historical connect between the two civilizations.

On the link between Tamil Nadu and China, Modi has suggested carrying out a research on the subject.