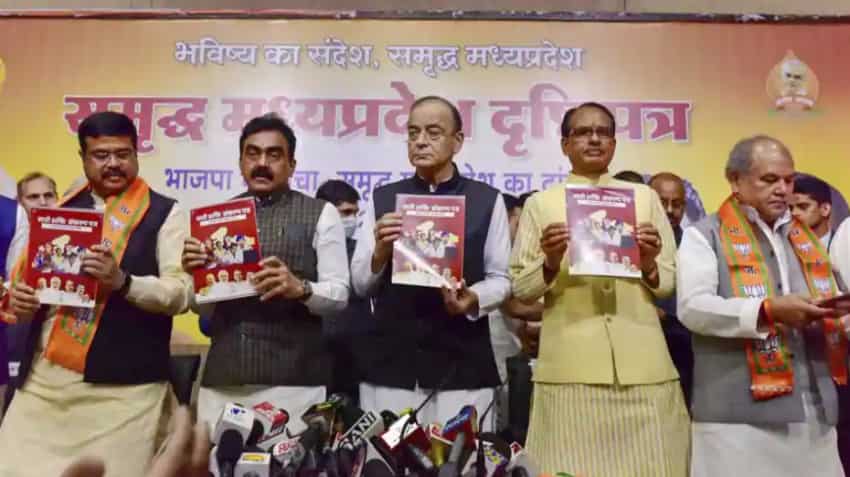 BJP has also released a separate document for women in its manifesto for the elections to be held on November 28, 2018. Image source: PTI

1. The BJP manifesto for the 2018 Assembly elections promises a proportionate bonus to small farmers, creation of 10 lakh jobs every year and two-wheelers to meritorious girls.

2. The BJP has promised a proportionate “direct payment” bonus  for the small and marginal farmers with up to five acres of land.

3. The party has promised to install sanitary napkin vending machines in schools, a Scooty to every girl who gets more than 75 percent marks in the Class 12 board examination in its women’s manifesto, the “Nari Shakti Sankalp Patra”.

4. The safron party also has promised to double the intake capacity for women in the educational institutions in five years.

5. The BJP promises to distribute Rs 40,000 crore loans among farmers if it comes to power. The party said it will bring 80 lakh hectares of land under irrigation in the next five years and set up a university to promote food processing.

6. The party claims that the irrigation scheme would benefit 80 lakh farmers.

8. The party promises to create 10 lakh jobs for the youth every year. To ensure ease of doing business in the state administrative response to investors, the party will set up a “CM Hotline”.

9. A “global skill park” in Bhopal and a new industrial township would be set up in the state, it stated.

10. The party said that the manifesto is the road map to convert Madhya Pradesh into a developed state and if it comes to power again it would spend Rs 2 lakh crore on urban infrastructure in the next five years.