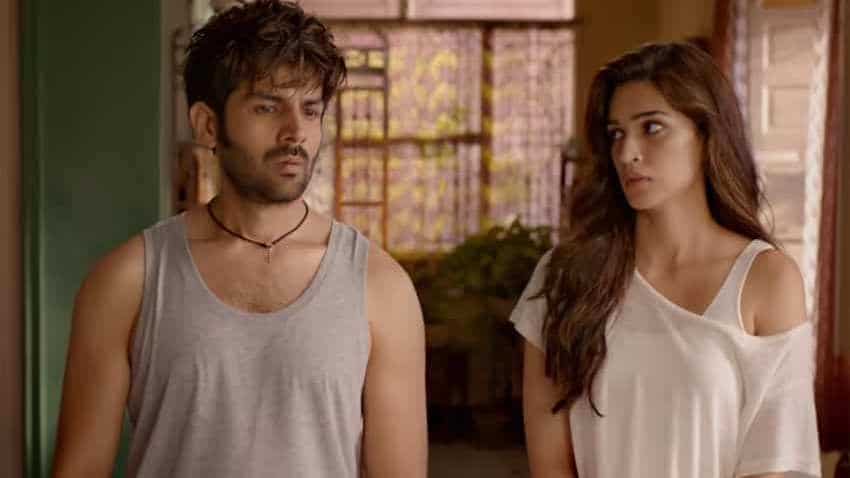 With the release of Luka Chuppi, the film may take few more days than expected to reach the Rs 100 crore mark.

Luka Chuppi Box Office Collection: Directed by Laxman Utekar, the film is a story of a reporter who decides to go for a live in relationship with his partner but his family joins in too. The story is set in Mathura, Luka Chuppi features Kartik Aaryan, Kriti Sanon along with Pankaj Tripathi, Aparshakti Khurrana and Vinay Pathak. The live-in love story Luka Chuppi is being released on March 1.

Film trade analyst Sumit Kadel told zeebiz.com that the film is set for a decent opening. "In India, the film will be released on around 2,100-2,200 screens. I expect the movie's first-day collection to be around Rs 6 to 7 crore on opening day," said Kadel. Kadel added that the film's budget is Rs 25 crore. Film trade analyst Taran Adarsh said the film will be released on 407 screens overseas. This takes the total to over 2500 screens worldwide.

Since the film is not facing a clashed-release with any other film, therefore it is expected to have a good run at the box offices. However, it's key competition will be from Total Dhamaal which was released on February 22.

The film may reduce the Total Dhamaal screen count to around half as it has failed to live up to the expectations. The film has so far earned Rs 88.05 crore in six days.

With the release of Luka Chuppi, the film may take few more days than expected to reach the Rs 100 crore mark.