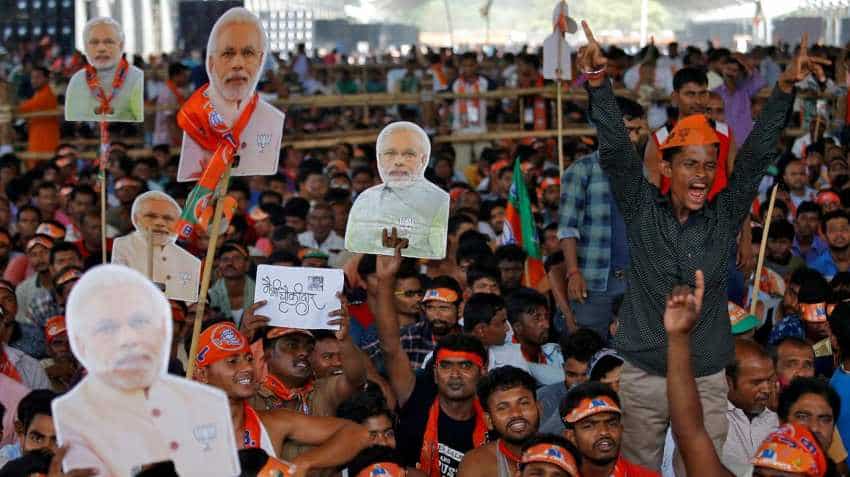 Both benchmarks Sensex and Nifty as they have passed the 40,000-mark and 12,000-levels already. Photo: Reuters

There is extreme excitement among investors with the comeback of NDA government highly likely even as Lok Sabha Elections Results 2019 counting of votes is on. The happiness is being witnessed in both benchmarks Sensex and Nifty as they have passed the 40,000-mark and 12,000-levels already - these are all-time highs. One can only expect, what will be the outcome at the end of market hours. At around 1041 hours, Sensex is trading at 40,038.13 rising by a huge 927.92 points or 2.37%. While Nifty 50 soared by a whopping 270.90 points or 2.31% trading at 12,008.80.

12,000-mark for Nifty was already a matter of time, but it was Sensex which has shown surprising and hefty performance making many investors richer in just 1 day.

Amit Gupta, Co –Founder and CEO, TradingBells had already predicted Sensex to reach 40,000-levels. Gupta said, "If the prediction of the exit polls turn out to be true and NDA does come out with a clear majority, the markets might see new all time highs once again. That would be the best time to start booking profits on your longs while waiting for the right time to re-enter on dips."

In just one day, investors got massively richer if they invested in stocks like Yes Bank, IndusInd Bank, SBI, L&T, ICICI Bank, Bharti Airtel, Kotak Mahindra Bank and Reliance Industries as they have surged by a massive 4% to 9%.

Interestingly, 40,000-mark is just the beginning of Sensex. In fact, experts have given a new target and that's even more amazing.

Romesh Tiwari, Head of Research, CapitalAim said, "Markets are expected to trade in a wide range of 2-3% before the trends of results, in the afternoon, comes out. Consensus on the big upward rally on the victory of BJP lead NDA can be used for unwinding long positions on market heavyweights like Reliance, HDFC, SBI etc. If early trends suggest BJP winning, then the markets may make new highs and the rally we have seen on Monday will continue. In that case Sensex can attempt to cross 41,500 and Nifty 12,300 and we can see profit booking at that level. Reaction of Midcaps and SmallCaps will be interesting to see as they are trading at better valuations than market heavy weights."

The counting so far reflects - NDA bagging majority with 337 seats, followed by 83 seats for Congress Party and 122 seats for others.