Lok Sabha elections results 2019: There was a debate whether Modi factor will be able to lead the BJP to win in this Lok Sabha elections. Now, even as the counting is going on, it is certain that the BJP-led National Democratic Alliance (NDA) is going to form government comfortably. 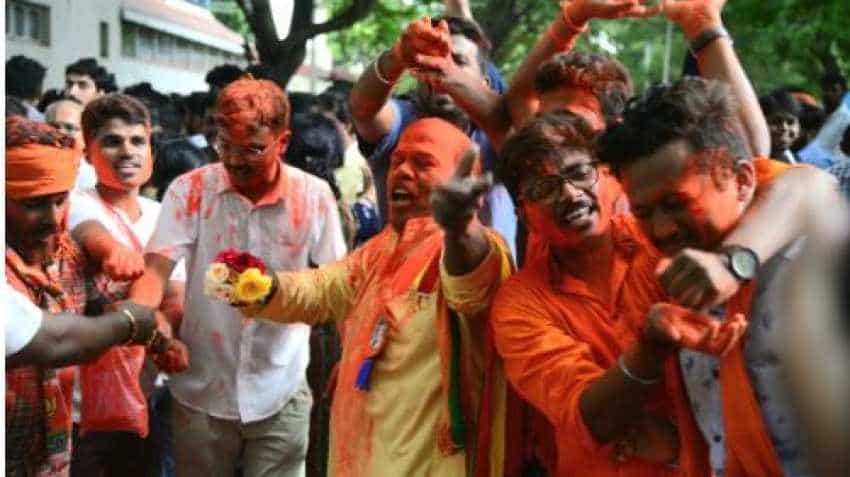 Lok Sabha elections results 2019: There was a debate whether Modi factor will be able to lead the BJP to win in this Lok Sabha elections. Now, even as the counting is going on, it is certain that the BJP-led National Democratic Alliance (NDA) is going to form government comfortably. This time, it seems that BJP is winning with an even bigger margin. And, the result has been full of surprises. In Amethi, Congress President Rahul Gandi's stronghold, Union Minister Smriti Irani is leading. Rahul Gandi in the last Lok Sabha elections won with over one lakh votes from this constituency. Rahul Gandhi, in a press conference, already accepted the defeat and congratulated Narendra Modi for this win.

The saffron party also put up an impressive show in some states where it did not get many seats. In West Bengal, the party gave a close fight to TMC, a state where in the last Lok Sabha elections in 2014 it got just two seats. The party is leading in 19 seats in the state. In Delhi too, BJP is expected to win all the 7 Lok Sabha seats.

At 7 pm,  in Uttar Pradesh, the BJP was winning in 60 seats and this tally is 13 seats short of the 2014 polls' numbers. In states such as Uttarakhand, Himachal Pradesh, Gujarat, Madhya Pradesh and Delhi where the saffron party is expected to win all the seats. In the southern state of Karnataka, where the party won 17 seats in 2014, it is expected that BJP is going to win 25 seats. This time, Congress is leading only in one seat, against 2014's 9 seats.

The party is expected to win 9 in Chhattisgarh, where it faced a big defeat recently. In the eastern state of Odisha, Naveen Patnaik-led BJD is expected to win in 12 seats, while the BJP is ahead in 9. However this time too, as the trends suggest that the party is not going to open score in southern states of Kerala, Tamil Nadu and Andhra Pradesh.

In Maharashtra, the party is expected to win 23 seats out of 48 seats. Prime Minister Narendra Modi arrived at BJP Headquarters in Delhi to meet the party workers and attend the plannery meeting.  "Together we grow. Together we prosper.  Together we will build a strong and inclusive India.  India wins yet again! #VijayiBharat," PM Modi in a tweet said after his party was leading the mojority of seats.

After early trends indicated that the NDA is going to win the elections with a big margin, equity markets witnessed new highs. BSE Sensex crossed 40,000 mark, while NSE's benchmark Nifty went past 12,000 level.

Modi 2.0: Corporate tax to relax? What economists at Morgan Stanley have predicted

PM Narendra Modi's first reaction on Lok Sabha election 2019 result out, this is what he tweeted