Lok Sabha elections 2019 results: The dust has finally, settled and the results are out. It is now clear that NDA will once again form the government and Prime Minister Narendra Modi will retain his post with a thumping majority. 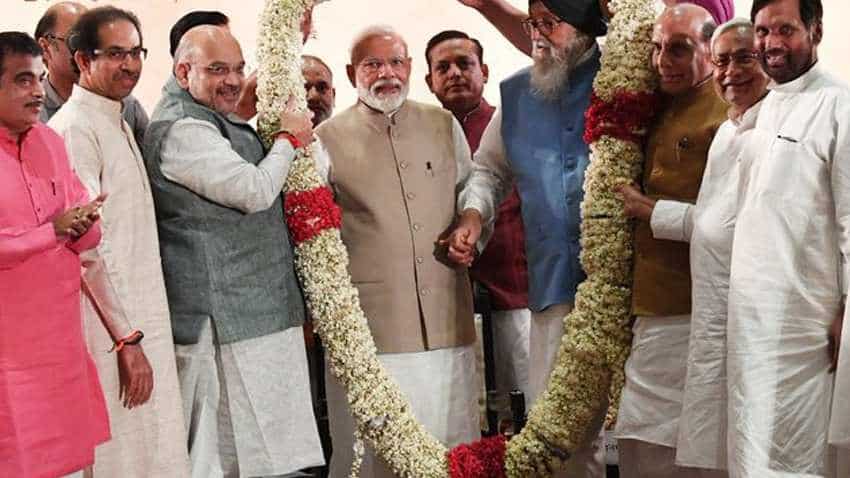 During the day, Sensex hit the 40,000 mark while the Nifty crossed the 12,000-level for the first time ever. Source - Narendra Modi/Twitter.

Lok Sabha elections 2019 results: The dust has finally, settled and the results are out. It is now clear that NDA will once again form the government and Prime Minister Narendra Modi will retain his post with a thumping majority. This boosted benchmark BSE Sensex to new highs even as it later erased early gains to end 299 points lower Thursday as investors booked profits. During the day, Sensex hit the 40,000 mark while the Nifty crossed the 12,000-level for the first time ever. However, the indices succumbed to profit booking towards the fag-end of the session. The 30-share Sensex tumbled 298.82 points, or 0.76 per cent, to close at 38,811.39 while NSE Nifty settled 80.85 points, or 0.69 per cent, lower at 11,657.05.

Amar Singh, Head - Advisory, Angel Broking Ltd believes that a lot is at stake and a stable government was the need of the hour, given the global headwinds, be it the US-China trade war or the US-Iran faceoff. "Markets witnessed extreme volatility but overall, both the investor confidence and sentiments have received a shot in the arm, and there is the general belief that India equity markets will outperform most of the global markets in years to come. So it becomes again an investment opportunity hunting ground for investors, as the Indian economy is poised to grow significantly over the coming years," he told Zee Business Online.

Rajesh Cheruvu, Chief Investment Officer, WGC Wealth told Zee Business Online that the win gives a massive chance to the government to pursue economic reforms. He added that such a strong mandate should ensure continuity of policy, further structural reforms and likely boost business and consumer sentiment and in turn to revive economic growth.

"This may lead to a medium term up-move in the equity markets. But, fundamentally, stock prices should respond to valuation multiples and earnings growth. In the Indian context, the latter has been missing for many years," he said.

What sectors will benefit?

Various economic and strategic reforms undertaken in the last five years like GST should get a fresh boost with the government led by Narendra Modi coming back to power, believes Dharmesh Kant, Head of Retail Research, IndiaNivesh Securities Ltd. He said that continuation of a stable regime under his leadership is expected to further strengthen the domestic economy.

"On the international front, Modi’s immediate task would be to deal with the rising tension in the Persian Gulf. As a waiver for sanctions from buying Iranian oil ends, India has to find other sources while making sure neither the US nor Iran gets irked by Indian actions," he said.

Kant added that the US-China trade war can provide the government with a rare opportunity to promote India as an investment destination on the face of rising obstacles of tariff increases by the US on China.

"As expected, markets have cheered Modi's comeback, a sign that foreign and domestic investors alike view him as a strong leader. We expect the markets to continue to be bullish going forward this year. From here on, any meaningful correction on the backdrop of global volatility will be lapped up by markets. Our advice is to buy corrections and stay invested," he said.