Union Finance Minister Nirmala Sitharaman and MoS Finance and Corporate Affairs Anurag Thakur is addressing a press conference on Economic issues and the state of economy. 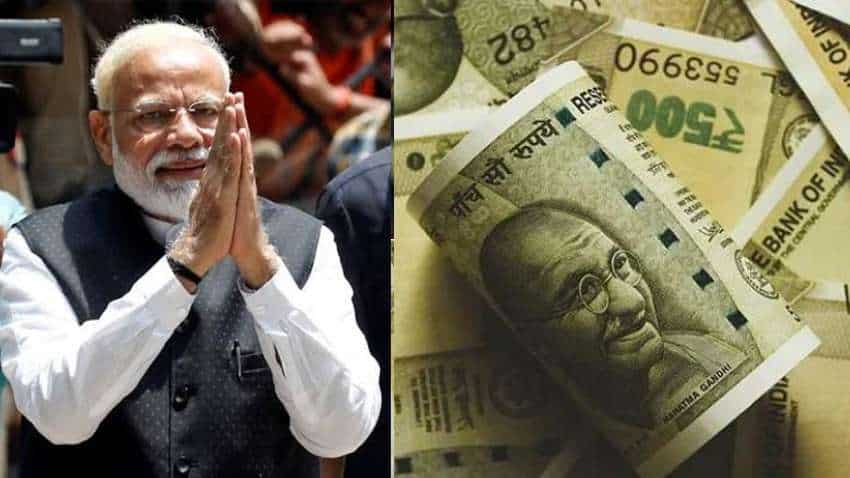 - The pandemic has adversely affected the economy. The needs of the poor and weaker sections addressed in various announcements by the govt. Supply constraints have somewhat eased but consumer demand still needs to be given a boost: FM Nirmala Sitharaman

- The proposals being presented are designed in a way that they can stimulate demand by front-loading/advancing some of the expenditure with some offsetting changes. Others are directly linked to an increase in the GDP: FM Sitharaman 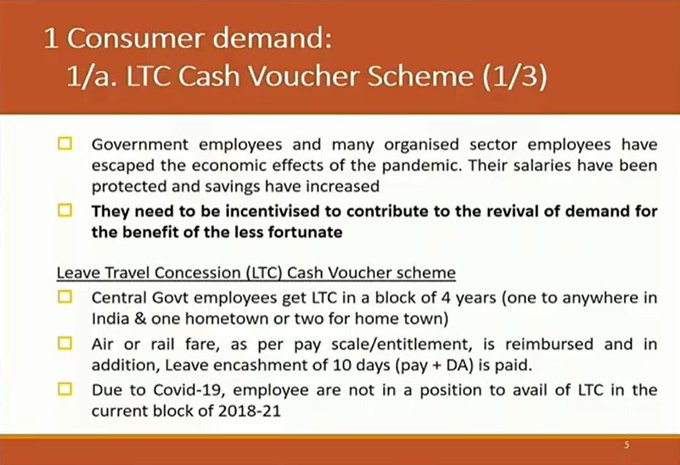 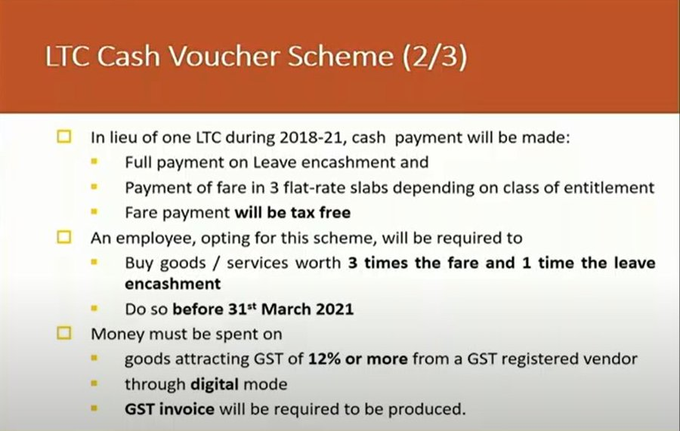 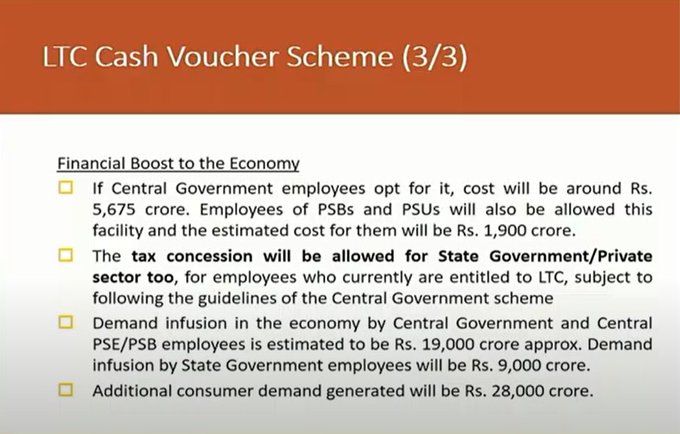 If Central govt employees opt for it, this will cost around Rs 5,675cr. The employees of PSBs & PSUs allowed to avail this facility, and for PSBs & PSUs the cost will be Rs 1,900 crores. The demand infusion in the economy by central govt & PSUs will be approx Rs 19,000 cr: FM Sitharaman 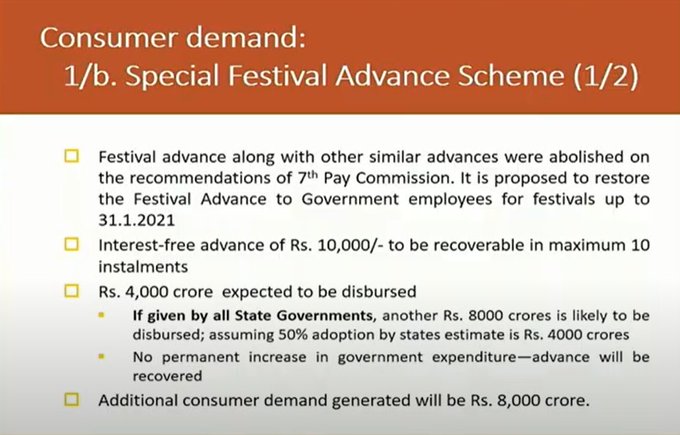 - "The one-time disbursement of Special Festival Advance Scheme is expected to amount to Rs. 4,000 crore; if given by all state governments, another Rs. 8,000 crore is expected to be disbursed. Employees can spend this on any festival" says FM Sitharaman 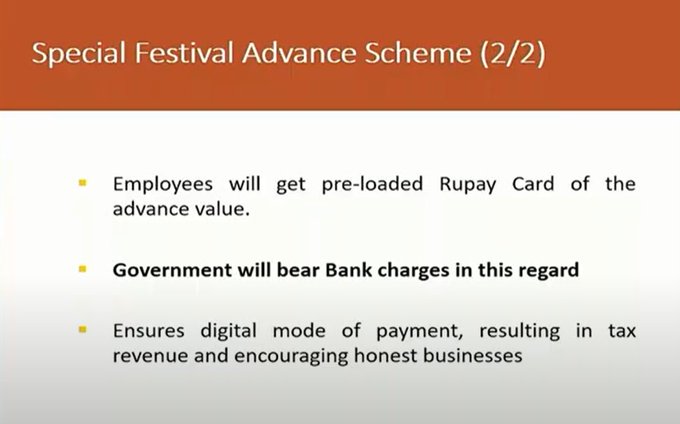 "Money spent on infrastructure and asset creation - has a multiplier effect on the economy, it not only improves current GDP but also future GDP, we want to give a new thrust to capital expenditure of both states and Centre," says FM Sitharaman

"We are issuing a special interest-free 50-year loan to states for ₹ 12,000 crore capital expenditure 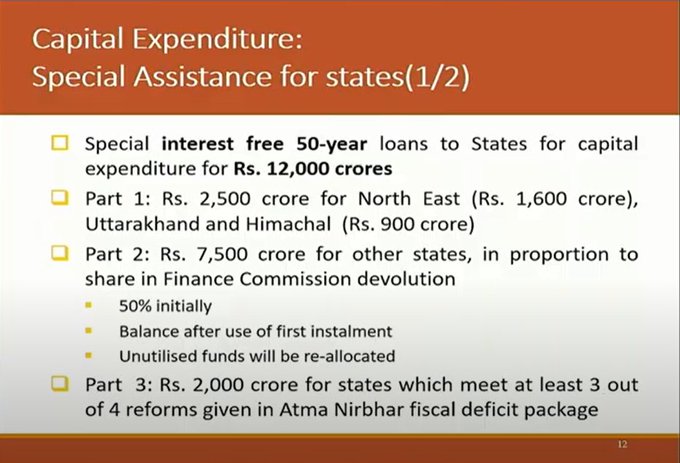 "Both Part 1 and Part 2 of interest-free loans given to states are to be spent by March 31, 2021. 50% will be given initially, remaining upon utilization of first 50% " says FM Sitharaman

"Under Part 3 of ₹ 12,000 crore interest-free loans to states, ₹ 2,000 crore will be given to those states which fulfill at least 3 out of 4 reforms spelled out in AatmaNirbhar Bharat package. This is over and above other borrowing ceilings." says FM Sitharaman 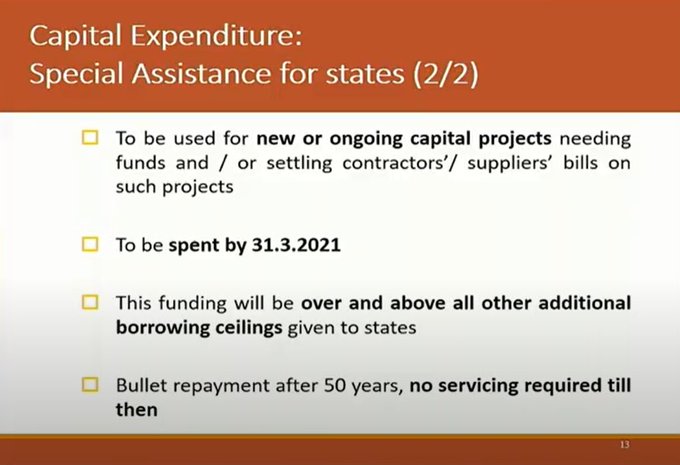 - Needs of the poor and weaker sections have been addressed in the AatmaNirbhar Bharat package, supply situation has improved, but consumer demand needs ot be given a boost - Finance Minister Nirmala Sitharaman