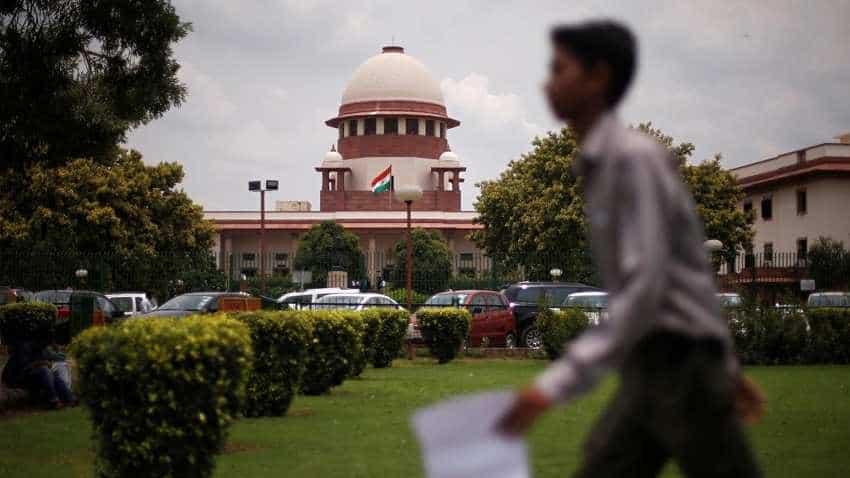 Ayodhya Case Supreme Court Verdict Latest News LIVE UPDATES: The Supreme Court on Saturday will pronounce the judgment in Ayodhya title dispute case at 10.30 a.m. on Saturday. The notice on the judgment was uploaded on the website of the court during the late evening on Friday. Here are all the LIVE updates:-

- BIG DEVELOPMENT! Supreme Court orders that Central Govt within 3-4 months formulate scheme for setting up of trust and hand over the disputed site to it for construction of temple at the site and a suitable alternative plot of land measuring 5 acres at Ayodhya will be given to Sunni Wakf Board.

-Iqbal Ansari, one of the litigants in Ayodhya case: I am happy that Supreme Court has finally delivered a verdict, I respect the judgement of the court.

-Zafaryab Jilani, Sunni Waqf Board Lawyer: We respect the judgement but we are not satisfied, we will decide further course of action.

- Kartik Chopra, spokesperson, Nirmohi Akhara: Nirmohi Akhara is grateful that SC has recognised our fight of last 150 years and has given the Nirmohi Akhara adequate representation in the trust to be set up by the Central Government to build & manage the Shri Ram Janmasthan Temple

-Varun Kumar Sinha, Lawyer of Hindu Mahasabha: It is a historic judgement. With this judgement, the Supreme Court has given the message of unity in diversity.

-Vishnu Shankar Jain, Hindu Mahasabha Lawyer: Supreme Court has said,  'to give 5 acres alternate land to Muslims at a prominent place in Ayodhya.'

- Ayodhya Case Supreme Court Verdict Latest News LIVE UPDATES: Supreme Court: The mosque was not abandoned by the Muslims. Though the Hindus continued to worship at Ram Chabutra but they claimed ownership on Garbh Garha also.

-  Ayodhya Case Supreme Court Verdict Latest News LIVE UPDATES: Supreme Court: There is evidence that Ram Chabutra, Sita Rasoi was worshipped by the Hindus before the British came. Evidence in the records shows that Hindus were in the possession of outer court of the disputed land.

- Ayodhya Case Supreme Court Verdict Latest News LIVE UPDATES:Supreme Court: Titles can’t be decided on faith and belief but on the claims. Historical accounts indicate the belief of Hindus that Ayodhya was the birthplace of Lord Ram.

-  Ayodhya Verdict Latest News - SC Judgement to be out shortly

- Ahead of the Ayodhya verdict, a huge crowd of lawyers and journalist gathered outside the Chief Justice courtroom in the Supreme Court. The courtroom of Chief Justice Ranjan Gogoi is yet to open. The crowd also includes the people connected with the case. A five-judge Constitution Bench of the Supreme Court will deliver its verdict in the Ayodhya title dispute at 10.30 a.m.

- Prime Minister Narendra Modi on Friday said that the Supreme Court verdict on Ayodhya will not be a victory or defeat for anyone, and asked everyone to maintain harmony.

A day before the judgement on Saturday morning, Modi appealed to the people that they should make it a priority that this verdict strengthens India's glorious tradition of peace, unity and harmony.

"Tomorrow the verdict of Supreme Court is coming. For last few months, hearings had been continuously held in Supreme Court and the country was looking with great attention. During this time, all sections of society made efforts to create an atmosphere of harmony which is very praiseworthy," he said in a series of tweets in Hindi.

"Keeping the respect of the country's judiciary as paramount, all sections of society and social and cultural organisations and all parties to the judgment have in the past few days endeavoured to create a positive and harmonious environment, which should be welcomed. We should maintain harmony even after the judgement."

"The Supreme Court verdict on Ayodhya will not be a victory or defeat for anyone. I appeal to the countrymen that it should be our priority that it only strengthens India's great tradition of peace, unity and harmony," he added.

- On Friday, Chief Justice of India Ranjan Gogoi had held a highly confidential meeting with Uttar Pradesh Chief Secretary and the Director General of Police. It is learnt this meeting focussed at taking stock of the law and order situation in the state.