A significant portion of them are migrant workers, who do not have basic housing facilities. They are mostly tribals and people from lower castes. They are either uneducated or less educated. With the lack of new job creation, even educated youth and youth from higher castes are a part of unorganised workers. 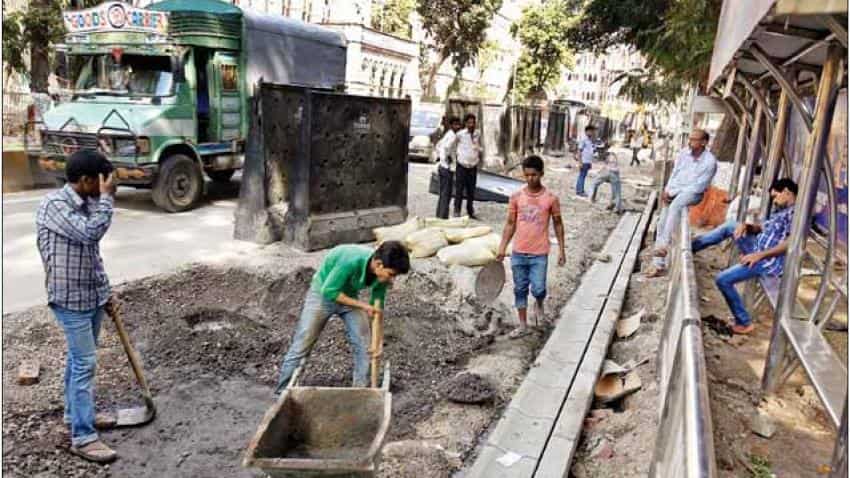 While workers in government and private sector have protection, the unorganised workers, close to 93% of the total workforce, claim that they are the most vulnerable. Image source: DNA India

While workers in government and private sector have protection, the unorganised workers, close to 93% of the total workforce, claim that they are the most vulnerable. These constitute livelihood earners like hawkers, rickshaw drivers, domestic help, construction workers, taxi drivers, cooks, private security guards, farm labours as well as employees in the industrial sector.

Who are unorganised workers?

“Workers or livelihood earners who are deprived of labour laws and basic rights are called unorganised workers. They are the unskilled or semi-skilled work force. They are vulnerable to the whims and fancies of management or government authorities and their livelihood can be stopped without any notice,” sums up Ashok Punjabi of Indian National Trade Union Congress (INTUC) in Gujarat.

A significant portion of them are migrant workers, who do not have basic housing facilities. They are mostly tribals and people from lower castes. They are either uneducated or less educated. With the lack of new job creation, even educated youth and youth from higher castes are a part of unorganised workers.

Fixed pay, long working hours, being deprived of social securities such as Provident Fund, insurance and medical benefits. They do not get leavesthey are entitled to. Workers in the construction sector and other hazardous industrial sectors also have a threat to their lives. In case of accidents, there is no institutionalised mechanism to ensure their rights are upheld. Family members of some, at times get compensation, but only as per the discretion of their bosses.

The system of contract labour and fixed pay has rendered them helpless against the rising cost of food items, medicines, education, fuel and housing. Women constitute a significant chunk of the work force in the construction sector but are not entitled to maternity benefits.

Self-employed livelihood earners such as hawkers and rickshaw drivers are vulnerable to the whims and fancies of municipal bodies and police force. Domestic helps were previously always the common suspects in cases of theft in houses they worked at and were often harassed. Such cases have decreased recently

There are close to two lakh autorickshaw drivers in Ahmedabad and 16 lakh in Gujarat. Rickshaw fares were not revised for about four years and when they recently were, the cost of fuel was raised, reducing the benefit of the hike. The drivers have sought the formation of an Autorickshaw Drivers’ Welfare Board and a one person-one rickshaw license law, as it has been found that wealthy persons buy 30-40 rickshaws and rent them out. Since the number of rickshaws have increased, drivers demand that no new permits are given out.

“There are close to two lakh rickshaw drivers in the city but parking space is restricted to 5,500 rickshaws. Road are encroached upon. We do not have place to park vehicles. Traffic staff forces us to leave the place. Often, rickshaws have been seized. How can we conduct business? We want parking space as per the number of rickshaws,” said Rajveer Upadhay, Secretary, Autorickshaw Drivers’ Action Committee

“We get fixed salaries but do not get other benefits. We have no fixed working hours and may be called any time of the day for work. In case of mishaps, often, the owner of the vehicle disowns all liabilities and the onus is on the driver,” said Hiralal Kalasua, Organisation Secretary, Amdavad Zilla Driver Parivar Association.

There are close to 7 lakh hand lorry operators in Ahmedabad. They have long working hours, are vulnerable to the whims and fancies of municipal authorities and police. Parliament passed the Urban Vendors Act in 2013 but it is not being implemented. They have asked the government to allocate them space, where there is no hindrance to traffic.

“We earn our livelihood on roads and streets. Often, municipal authorities and police force us to leave the place. Sometimes we are also harassed by anti-social elements. We want people to treat us like humans. We can’t raise our voice as it is very difficult to organise street hawkers. We file petitions, but that has not changed things much,” said Punja Desai, Vice President, Lari Galla Ladat Samiti - Lari Galla Vibhag.

“Our main business is in the evening and at night. We are not allowed to work after 11:00pm. Authorities are widening roads, forcing us to move. We sell goods for the lower and middle class. We have our own market. Even people from villages buy things from us as they are cheap. They will go to other vendors if they don’t find us. How do we earn if we are moved? Somehow, we need to unite,” said Bhagubhai Parmar, Secretary, Lari Galla Ladat Samiti - Patharna Patharna Vibhag.

There are approximately 45,000 domestic helps in Ahmedabad city, about five lakh in Gujarat and about one crore in the entire country. These are mostly tribals from Dungarpur district of Rajasthan. Males migrate to cities while the families stay in Dungarpur. They practically work from morning to night seven days a week but have no social security.

“We do not have basic housing facilities. Often there are six to eight people stuffed in small rooms. Despite hard work, earnings are meagre. We have to pay rent, fend for ourselves and send money to our homes. Earlier, we were the suspects when any theft occurred in houses we worked at. We were unduly harassed. This has stopped now,” Shantilal Manat, Organisation Secretary, Gharghati Bandhkam Kamdar Union.

Labour Day 2018: All you want to know; Watch video