Kesari box office collection: The Akshay Kumar- starrer  is heading towards the milestone of Rs 150 core at the box office. 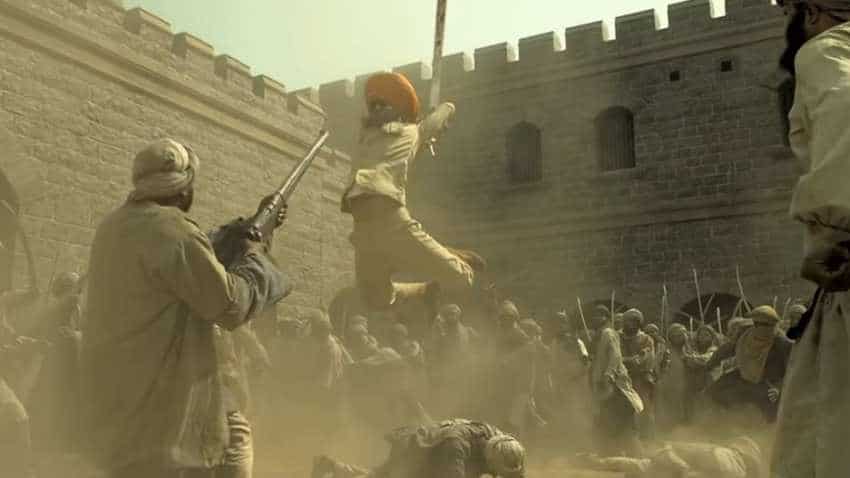 Kesari box office collection: If the collection jumps during the weekends (Saturday and Sunday) then Rs 150-crore mark will not be a distant target. Image source: Sreen grab from trailer
Written By: ZeeBiz WebTeam
RELATED NEWS

Kesari box office collection: The Akshay Kumar-starrer is heading towards the milestone of Rs 150 core at the box office. The movie has so far seen good audience turnout in theatres. The Anurag Singh directorial venture collected Rs 1.65 crore on Friday, with this the total earnings of the film stands at Rs 137.17 crore in India business. If the collection jumps during the weekends (Saturday and Sunday) then Rs 150-crore mark will not be a distant target.

The film is based on the Battle of Saragarhi fought in 1897. The storyline revolves around the valour of Sikh soldiers under the leadership of Havildar Ishar Singh (Akshay Kumar).  The 36th Sikh Regiment of the British Indian Army led by Singh had fought against 10,000 Afghan troops. The unmatched battle depicted in the film has caught the imagination of the audience. On the first day itself, the film has earned over Rs 21 crore, which is the highest opening collection of this year for a Bollywood movie, despite it was released in the second half of the day due to Holi.

Kesari is the fastest film to enter Rs 100 crore club in 2019, which is followed by Gully Boy and Total Dhamaal.  Besides Akshay Kumar, the film features Parineeti Chopra, Vansh Bhardwaj, Mir Sarwar, Jaspreet Singh, Vikram Kochhar and Vivek Saini. The collection during the weekends and the following weekdays will give a clear picture of its earning potential in the coming days.