Directorate General of Civil Aviation has asked domestic airlines to mount additional flights. This is ahead of of Prime Minister Narendra Modi's impending visit to the state to gauge the situation on the ground. 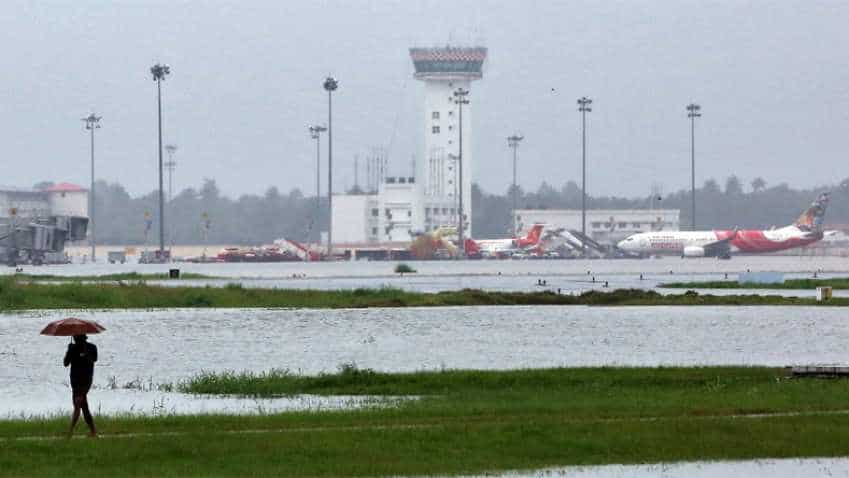 DGCA has asked airlines to keep airfare on the route under Rs 10,000.
Written By: ZeeBiz WebTeam
RELATED NEWS

Monsoon fury has hit different parts of the Western Ghats including districts of Kerala and adjoining areas in Karnataka. The grim situation has left Kerala with only two operational civil airports at Thiruvananthapuram and Calicut, as operations at the Kochi airport have been suspended till August 26. Considering the plight of the populace, the central government has taken action to bring relief as soon as possible.

Directorate General of Civil Aviation has asked domestic airlines to mount additional flights. This is ahead of of Prime Minister Narendra Modi's impending visit to the state to gauge the situation on the ground.

"In view of the closure of Cochin airport and to ensure that passengers are not inconvenienced, DGCA has asked the scheduled domestic airlines to mount additional flights. Out of 71 arrivals and 74 departures of scheduled domestic airlines to/from Cochin,  23 arrivals and 24 departure have been rescheduled and additional 19 arrivals/departure have been mounted to/from Trivandrum, Calicut and Coimbatore airports. Nine foreign carriers operating to Cochin have also rescheduled their flights to/from Trivandrum," said DGCA in a statement.

To ensure flyers are not put to any inconvenience as well as not overcharged, the DGCA has also asked the airlines to keep a check on surge pricing of airfares.

"Scheduled domestic airlines have also been advised to ensure that airfares for flights to/from Trivandrum and Calicut airports in Kerala and nearby airports i.e. Mangalore and Coimbatore are kept at an optimal level proportionate to sector distance so that travelling public is not inconvenienced. Accordingly, airlines have been requested to cap the maximum fare around INR 10,000 on longer routes and around 8000 on shorter routes to/from Kerala and nearby airports," said the statement.

DGCA has also convened a meeting with the higher management of domestic airlines today in this regard.

"Control Room set up by DGCA is working 24x7. Passenger-related issues pertaining to refund of air ticket, rescheduling of flight, alternate options available to them are being addressed," read the statement.

The death toll in the state due to the floods has risen to 164. Over two lakh people are living in over 1,500 relief camps across the state.