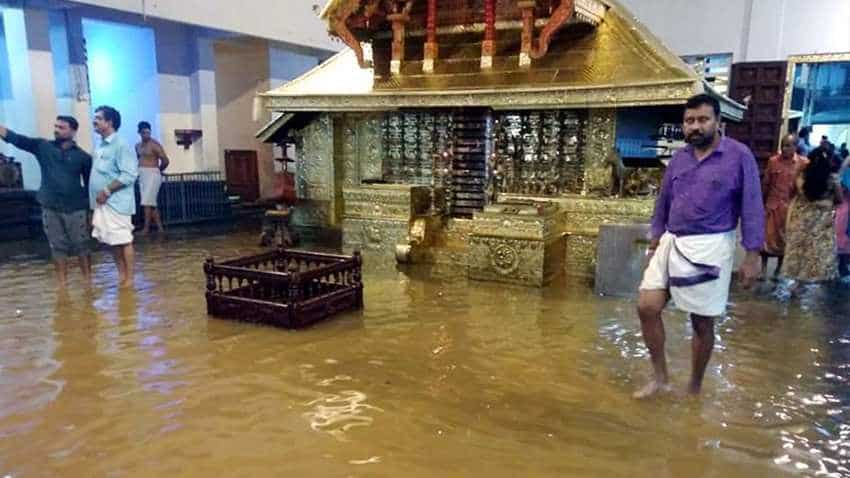 Day to day activities have also been hit because of the rain. Source - IANS.
Written By: ZeeBiz WebTeam
Edited By: Harish Dugh
RELATED NEWS

Kerala Floods 2019: The Southern state of Kerala, which was yet to recover completely from the floods that hit it last year, faces another tricky situation as several parts of the state continue to receive heavy downpour since Tuesday night. As a result, many low lying areas of the state have been waterlogged and the death toll has gone up to 95. While the rescue work continues, a red alert has been issued by the Indian Meteorological Department (IMD) for three north Kerala districts of Malappuram, Kannur and Kozhikode, which bore the brunt of the flood fury and landslides last week.

The authorities have also said that another district, Pathanamthitta, which has been receiving very heavy rains since last night is put on a high vigil. The IMD authorities forecast heavy to very heavy downfalls at isolated places in Kerala. The fishermen too have been asked not to put out to sea. In nearby Vizhinjam, a fisherman was drowned and three others were rescued when their fishing craft capsized.

Day to day activities have also been hit because of the rain. Educational institutions in as many as 11 districts have declared holiday on Wednesday keeping in mind the forecast.

Kerala Chief Minister Pinarayi Vijayan also held a cabinet meeting and said that that the government was trying to provide all possible help to those affected. He announced that as per the state disaster response fund (SDRF) criteria, Rs 10,000 would be given as immediate assistance to the calamity-hit families. Those who have lost their homes and land would be given Rs 10 lakh, while those whose houses had been destroyed or damaged would get four lakh rupees, he added.

Of the 95 deaths reported, 35 were from Malappuram and 12 from Wayanad, where massive landslides had battered high range villages of Kavalappara and Puthumala.

As many as 1.89 lakh people have been displaced by the floods and landslides. They have taken refuge in 1,118 camps as 1,057 houses have been completely damaged and 11,159 partially destroyed across the state. The search operations are on at Kavalappara, where a series of landslides had wiped out an entire village, to trace those who were suspected to have gone missing.