Though Kumaraswamy moved the confidence motion at 11am and began speaking on it, Congress Legislature Party (CLP) leader Siddaramaiah raised a point of order. 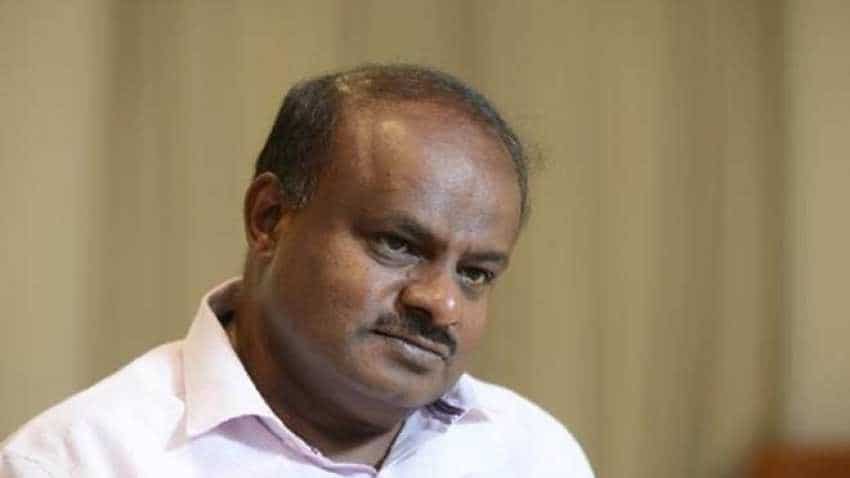 Chief Minister H.D. Kumaraswamy moved earlier in the day to prove his coalition government has majority in the House. Photo: Reuters
Written By: IANS
Edited By: Harish Dugh
RELATED NEWS

The Karnataka Assembly was adjourned on Thursday for 30 minutes following a ruckus between the ruling Congress-JD-S and opposition BJP members on the delay in holding the floor test on the confidence motion Chief Minister H.D. Kumaraswamy moved earlier in the day to prove his coalition government has majority in the House.

"I adjourn the House for 30 minutes due to disorder over the BJP demand for floor test forthwith and the Congress opposing it without debate," Speaker K.R. Ramesh Kumar told the members even as the ruling allies lawmakers trooped into the well of the House.

Though Kumaraswamy moved the confidence motion at 11am and began speaking on it, Congress Legislature Party (CLP) leader Siddaramaiah raised a point of order on the Supreme Court`s order that the 15 rebel members of the ruling allies were not compelled to attend the session and the party`s whip will not be applicable on them to defy it.

As Siddaramaiah took time to debate on the issue and other party members intervened to prolong it, ostensibly to delay the floor test, many restive BJP members protested the dilatory tactics of the ruling allies and urged the Speaker to hold the trust vote immediately, as it was getting latte and the House will resume the session only on Monday with a 2-day weekend break.

With about 20 legislators, including 15 rebels, 2 Congress members Srimanth Patil and B. Nagendra, 2 Independents (R. Shankar and H. Nagesh) and 1 BSP (N. Mahesh) abstaining from the Assembly, the BJP members accused the ruling allies of deliberately delaying the floor test fearing imminent defeat in the absence of numbers or majority.

"The ruling members are afraid of the floor test as, 18 of their colleagues are not present in the House and hence scared of proving they have majority, as they have been boasting for long," BJP leader and its former chief minister Jagadish Shettar told the Speaker.