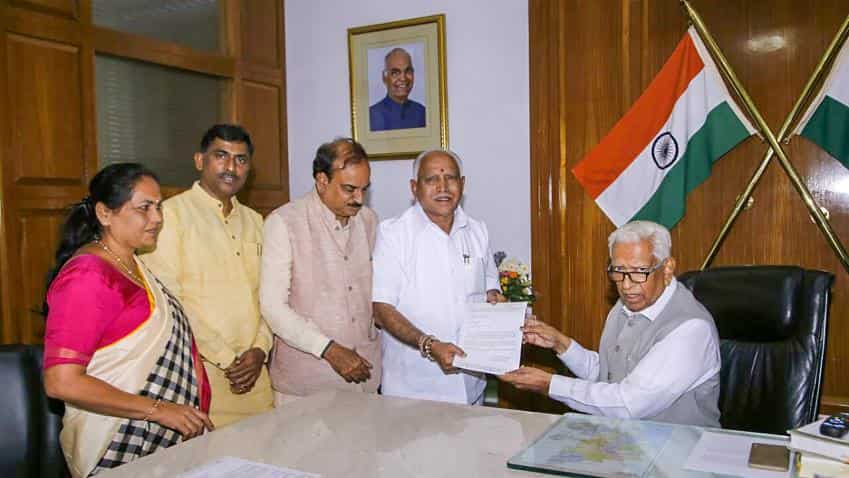 The newly elected legislators of BJP in Karnataka today formally elected BS Yeddyurappa as the legislative party leader, party spokesman S Shantharam said. Yeddyurappa, who was projected as the Chief Ministerial face of the Bharatiya Janata Party in the Karnataka Assembly elections held on May 12, said, "the party has chosen me. I have given the letter to the governor & he will call me, that is what I am hoping. He told me that he will take an appropriate decision. I'll inform you after I receive letter from governor."

Of the 222 constituencies, the BJP has won 104 seats, while the Congress won 78 and Janata Dal-Secular won 38 seats, along with its ally Bahujan Samaj Party (BSP), throwing up a hung assembly in the state.

BJP's national Vice President Vinay Sahasrabuddhe, who is in New York, said he is confident that Karnataka Governor Vajubhai Vala will respect the party`s position as the single largest one and invite it to form the government. He told IANS, "I am sure being the single largest party we have the rightful democratic claim on forming the government and the Governor is definitely going to respect the claim."

The Congress on Tuesday extended its backing to the Janata Dal-Secular (JD-S) to form a government in Karnataka. The party leaders Ghulam Nabi Azad and Siddaramaiah, the outgoing Chief Minister of Karnataka, made this announcement.

As political scenario gets intensive in the state, Karnataka Congress leaders have reportedly alleged that the BJP is trying to "poach" their MLAs in an attempt to establish majority to form the government.