Karnataka Bus Strike: Bus services were disrupted for the sixth consecutive day in Karnataka as the strike by the employees of the road transport corporation on wage related issues continued on Monday. 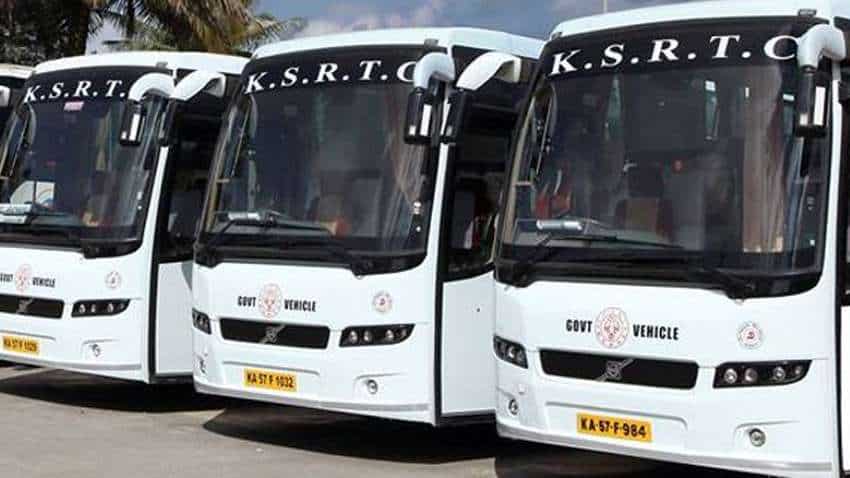 People wanting to travel to their native places to celebrate Ugadi, which is on Tuesday, and office-goers were the most affected. Pic from KSRTC Twitter.

Karnataka Bus Strike: Bus services were disrupted for the sixth consecutive day in Karnataka as the strike by the employees of the road transport corporation on wage related issues continued on Monday.

With a stalemate between the government and employees of the four transport corporations in the state, over their demand for wages as per the 6th Pay Commission continuing, majority of the workers did not turn up for work, resulting in buses remaining off road, affecting commuters.

Amid threats of tough action, "no work no pay", few RTC employees have returned to work and are operating buses on some routes in the city and different parts of the state.

People wanting to travel to their native places to celebrate Ugadi, which is on Tuesday, and office-goers were the most affected.

Private buses, mini buses, maxi cabs and other passenger transport vehicles, whom authorities have roped in to manage the crisis and help commuters, were seen providing services to passengers in different parts of the city and the state.

Metro trains, autos and cabs were also being largely used for commuting within the city.

Meanwhile, intensifying their protest, employees along with their family members have decided to stage demonstrations at district and taluk centres, in front of Deputy Commissioner or Tahsildar offices Monday against the government's stand.

Accusing the government of not paying their March salary, thereby affecting their Ugadi celebrations, they said, employees who have returned to work are being paid, as per a report in PTI.
Warning!

RTCs that have been warning employees against continuing with the strike, have started taking action against trainee and probationary employees by dismissing them for absence from work and not responding to notices.

Karnataka State Road Transport Corporation (KSRTC) on Sunday had said it has decided not to consider requests for inter-corporation transfers of employees who are instigating, threatening colleagues to strike and are hindering bus services, thereby causing inconvenience to the public. It had also said that employees who have been given such transfers, have been warned that it will be cancelled and that they will be posted to their original place on failing to attend on duty immediately.

Citing inconvenience caused to the public and that the strike was against provisions of the Industrial Disputes Act, the Labour department on Friday had issued an order banning the strike, and had referred the dispute to the industrial tribunal, Bengaluru for adjudication.