Karnataka Assembly elections 2019: Braving chill weather, ruling BJP candidates in the four constituencies of Bengaluru -- Byrathi Basavaraju in K. R. Pura, K. Gopalaiah in Mahalakshmi Layout, M. Sarvana in Shivajinagara and S. T. Somashekar in Yeshwanthapura were among the early voters to exercise their franchise at the hustings. 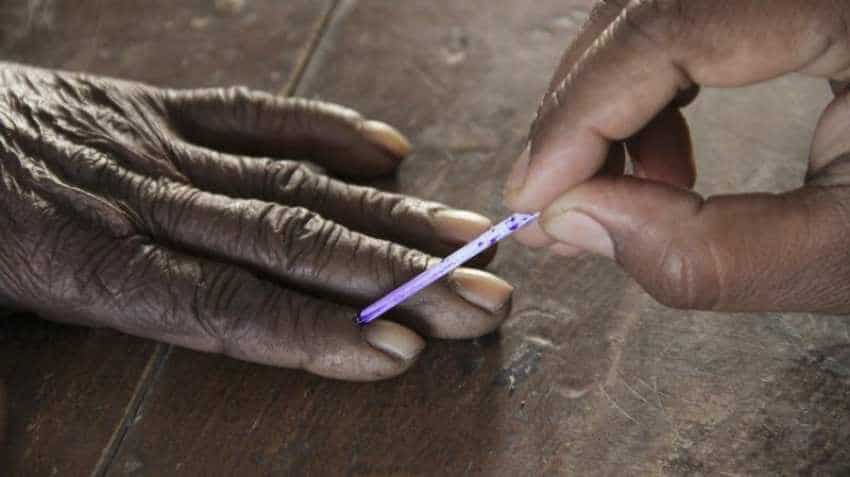 Karnataka Assembly elections 2019: Voting began at 7.00 a.m. in all the 15 Assembly segments peacefully amid tight security and picked up momentum an hour later as hundreds of voters turned up in most polling stations, Photo: Reuters
Written By: IANS
RELATED NEWS

Karnataka Assembly elections 2019: Voting is underway in 15 Karnataka Assembly constituencies where bye-elections are being held to fill the vacancies caused by the resignation and disqualification of the 14 Congress and three JD-S rebels in July, an official said.

"Voting began at 7.00 a.m. in all the 15 Assembly segments peacefully amid tight security and picked up momentum an hour later as hundreds of voters turned up in most polling stations to cast their ballot," an Election Commission official told IANS here.

Braving chill weather, ruling BJP candidates in the four constituencies of Bengaluru -- Byrathi Basavaraju in K. R. Pura, K. Gopalaiah in Mahalakshmi Layout, M. Sarvana in Shivajinagara and S. T. Somashekar in Yeshwanthapura were among the early voters to exercise their franchise at the hustings.

Ruling party`s contestant Mahesh Kumathalli in Athani and A. H. Vishwanath in Hunsur also cast their votes in the first hour of the 9-hour polling, which ends at 6.00 p.m.

"The Election Commission has declared paid leave for the voters working in public or private offices to exercise franchise in their polling stations," asserted the official.

As many as 165 candidates, including 126 Independents and 9 women are in the fray in the 15 Assembly seats.

The BJP and the opposition Congress are contesting in all the 15 Assembly seats, while the JD-S only in 12 seats.

The 3,185 polling stations have a total of 8,326 ballot units and 8,186 controlling units and 7,876 VVPATs (Voter Verifiable Paper Audit Trail) for casting the ballots.

The vote count is on December 9.

The outcome of the bye-elections will decide the survival and continuation of the four-month-old BJP government in the southern state.

The ruling party, which has 105 members, including one independent but excluding the speaker, needs to win 7 more seats to have a majority (112) in the 223-member Assembly, with 2 vacant and one nominated with voting right.

The Congress has 66 members, JD-S 34 and the Bahujan Samaj Party (BSP) one.

Though there 17 vacancies in the 225-member Assembly, including one nominated from the Anglo-Indian community with voting rights, bye-elections in two seats -- Muski (Raichur district) and R. R. Nagar (Bengaluru) have been withheld due to litigation in the Karnataka High Court over their results in the May 2018 stare Assembly elections.

The BJP has fielded 11 Congress and three JD-S defectors on joining the ruling party on November 14 after the Supreme Court on November 13 allowed them to re-contest though it upheld their disqualification by former Assembly Speaker K. R. Ramesh Kumar on July 25-28.

The ruling party has fielded its former city corporator Sarvana from the prestigious Shivajinagara constituency in Bengaluru central after the party`s high command declined to admit former Congress leader Roshan Baig, who represented the seat for seven times.

In Bengaluru, where bye-elections are being held in four of the 28 seats -- K. R. Pura, Mahalakshmi Layout, Shivajinagara and Yeshwanthapura, deputy police commissioners of their jurisdiction are supervising the security arrangements.

"Of the 1,064 polling stations in the four Assembly segments across the city, the Election Commission has declared 238 booths as hypersensitive and 826 as sensitive," the official said.

The police also issued a ban order under section 144 of the CrPC (Criminal Procedure Code) to prevent assembling of more than 5 persons while the state excise department prohibited sale of liquor till Thursday midnight on the direction of the states," chief electoral officer said.

In all, over 21,000 polling officials and about 19,000 security personnel, including the state police and central forces are on duty in the 15 Assembly seats.