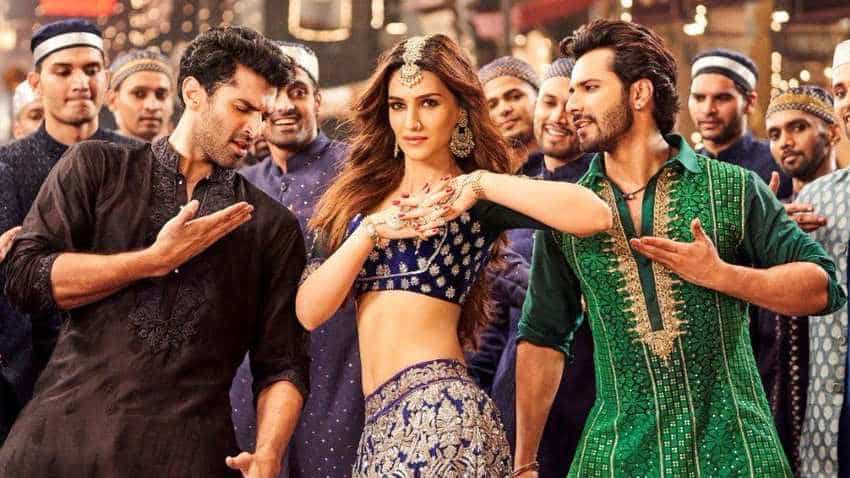 The movie is set during the partition era and that by itself lends an altogether different look and feel to the film. Source - Varun Dhawan/Twitter.
Written By: ZeeBiz WebTeam
RELATED NEWS

Kalank box office collection: The highly-awaited period drama, Kalank, starring Varun Dhawan, Alia Bhatt, Sanjay Dutt, Sonakshi Sinha, Madhuri Dixit and Aditya Roy Kapur in lead roles has released on Wednesday. The multi-starrer, bankrolled by Karan Johar's Dharma Productions, is the biggest film of the year so far. The movie is set during the partition era and that by itself lends an altogether different look and feel to the film. It is directed by a relatively new Abhishek Varman who had delivered a hit with 2 States. Kalank film idea is reported to have been very dear to Karan Johar's father Yash Johar - it was conceptualised 15 years ago. However, the film never did take off beyond the initial stage and has finally been released today.

The makers have decided to release Kalank on Wednesday due to Mahavir Jayanti. This gives the film the advantage of a massively extended weekend and a chance to rake in a lot of extra money. Another thing that works in Kalank's favour is that April 19 is Good Friday and holiday in most parts of the country. So, between Wednesday and Sunday, the film has four holidays. If the initial reviews are positive, Kalank film should easily go past the Rs 100 crore mark by the end of the weekend.

Kalank is one of the many films that are a result of Bahubali's unbelievable success at the box office. But, for these films to be a success, they need to arrive big. Fox Star is ensuring that happens by opening it at huge count of 3000 screens with a major chunk of shows reserved for it.

One of the most popular pair of the 90s is reuniting after a long gap of 21 years. The two actors addressed each other as Ma'am and Sir on public platforms for Kalank's promotions, adding to the buzz and excitement, Kalank could be a trip down the memory lane for both these actors' fans.

A major boost for Kalank collection is that there is no other big rival film releasing this weekend. Also, the films already running in theatres have exhausted their run too. While John Abraham's Romeo Walter Akbar never picked up, Akshay Kumar's Kesari has slowed down by its third week. Also, because of the early release, Kalank has a clear window of nine days before Avengers: Endgame hits the theatres next week.

Word of mouth plays an important role in any film's success these days, take Uri for example. From Neha Dhupia to Shashank Khaitan to Milap Zaveri, many celebrities have already showered love and praise on the magnum opus through social media. Neha Dhupia called the film "a winner," Dhadak filmmaker Shashank Khaitan referred to Kalank as "a visual treat." If these reviews are to go by, there should be no stopping Kalank film.