Kaala box office collection day 1: Rajinikanth is a superstar and his charisma is unabated. His latest release, Kaala collection day 1 is expected to hit a whopping Rs 30 crore mark approximately. 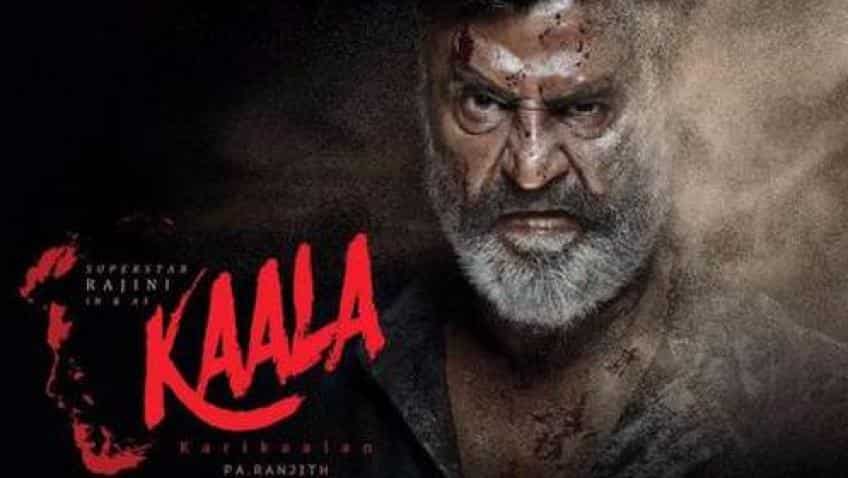 Kaala collection will be dictated to a large extent by the number of screens that the movie is screened on. Image source: Twitter
Written By: ZeeBiz WebTeam
RELATED NEWS

Kaala box office collection day 1: Rajinikanth is a superstar and his charisma is unabated. His latest release, Kaala collection day 1 is expected to hit a whopping Rs 30 crore mark approximately. His films have done well over the years, whereby he has created a huge space just for himself that he has been dominating for decades. Rajinikanth's iconic image and his star has been burnished year after year to the extent that he has been able to jump into the political space too where he is set to give the existing political parties a tough time.

Kaala box office collection, both in the southern market as well as the Hindi one is expected to cross the Rs 30 crore mark on opening day. The break-up is that up to Rs 28 cr may well come from the South, while Rs 2.5 cr is expected from the Notth, according to a LiveMint report. However, opinion is divided as there are other reports that are suggesting a much higher number in the Hindi market that may even breach the Rs 5 cr mark.

Kaala collection will be dictated to a large extent by the number of screens that the movie is screened on. This time, it is being released in 2,000 screens. According to LiveMint, this is much less than what Rajinikanth's previous movie Kabali was released in the year 2016, which was between 3,000-3,500. Kaala has been released today and scenes outside cinemas in Chennai shows fans dancing around merrily and hordes of others rushing to get entry.

As a comparison, previous 2 Rajinikanth releases, Lingaa and Kochadaiiyaan box office collection were Rs 149 crore and Rs 70 crore. Kaala collection may suffer due to its release being pushed back from the April deadline when the weather is much more pleasant to the torrid month of June. Be that as it may, Kaala box office collection day 1 is important as the initial word of mouth boost will decide the success of the film. The stronger the effect on those who watch the film and then spread the word, the higher the chances of the earnings. The film has been released on Thursday and this will give it a chance to get a big opening weekend in. The fact that summer vacations have started will go a long way in boosting the box office collections. As far as Kaala the movie is concerned, Rajinikanth has delivered yet another iconic movie in his unique style that will leave his fans floored.