A day after Prime Minister Narendra Modi was sworn-in once again, the benchmark Sensex reclaimed the 40,000-mark on Friday morning, rallying around 300 points in the early trade. 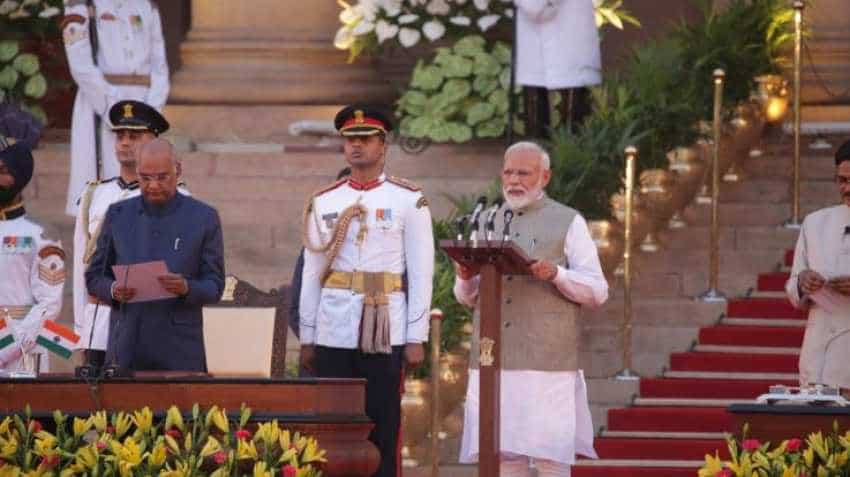 New Delhi: President Ram Nath Kovind administers the oath of office to Narendra Modi as the Prime Minister of India at a swearing-in ceremony at the Rashtrapati Bhavan in New Delhi on May 30, 2019. (Photo: Amlan Paliwal/IANS)

A day after Prime Minister Narendra Modi was sworn-in once again, the benchmark Sensex reclaimed the 40,000-mark on Friday morning, rallying around 300 points in the early trade. The rally was led by banking and IT stock gains, aided by positive domestic cues and strong foreign fund inflow.  At 11.25 am, the BSE was trading at 40,073.36 after hitting a high of 40,119.81. The NSE Nifty also crossed the 12,000 level and was trading at 12,021.85.

PM Modi took oath Thursday along with 57 ministers that included some surprise names as BJP president Amit Shah and former foreign secretary S Jaishankar. Several reports have claimed that Shah may get the Finance portfolio in the new Modi Cabinet.

It was also believed that Piyush Goyal may become the full-time Finance Minister after donning the role part-time for some months in the last term due to the absence of Arun Jaitley because of health reasons.

Market expert Ajay Bagga had predicted on Thursday that the response of markets to either Shah or Jaitley would be positive. "If Amit Shah is given the Ministry of Finance, it will be clear that he is the second most important person in the government. He has been a banker and been associated with financial services for 30 years now, so he has the experience. But, there are some reports claiming that he has an important role to play in the party. So, things will be clear by evening," Bagga had told Zee Business TV.