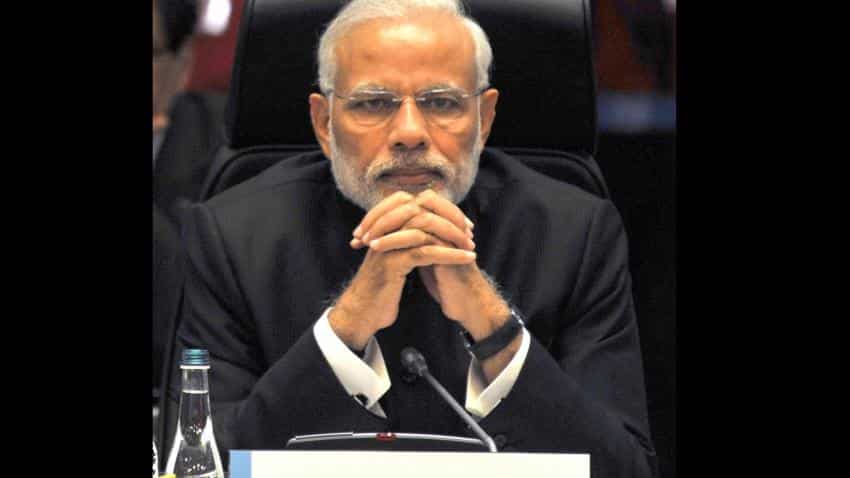 Prime Minister Narendra Modi, with much fanfare and global events had catapulted  his Make in India campaign into the global arena. However, with his demonetisation drive, it seems that Make in India may be undoing itself.

For two years, he sifted through world capitals asking companies to 'Make in India'. Projecting India as a low-cost and efficient manufacturing hub was one of his core agenda to create jobs in the country.

Now, manufacturers in India are not very optimistic about future investment outlook, a survey conducted by Federation of Indian Chambers of Commerce and Industry (FICCI) showed. “Despite better capacity utilisation, the future investment outlook is not very optimistic. As for Q-3 2016-17, 77% respondents as against 73% respondents in previous quarter reported that they don’t have any plans for capacity additions for the next six months,” the report said.

The higher percentage implies slack in the private sector investments in manufacturing may continue for some time.

Stating the reason for this slump the report said, “Increased competition from imports, lack of demand and from industrial sectors and OEMs, shortage of credit are some of the major constraints which are affecting the expansion plans of the respondents.”

Responses were drawn from 332 manufacturing units from both large and SME segments with a combined annual turnover of over Rs 4 lakh crore, the report said.

The capacity utilisation in some sectors like textiles and technical textiles, metals, paper, food, chemicals, auto had almost remained the same or increased marginally in Q2. 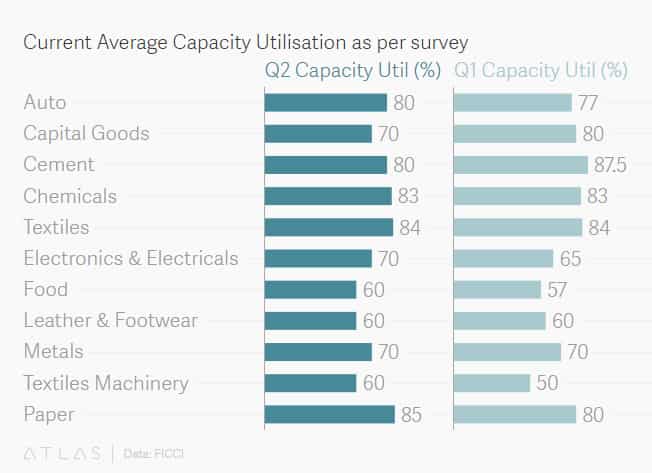 However, growth expectations for the third quarter do not look very enticing.

Out of the 12 sectors, eight expect growth to be moderate in the third quarter while three sectors expect strong growth and textile is expected to see under 5% growth. 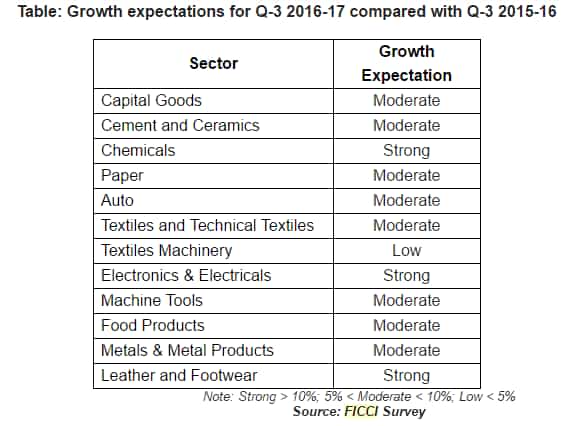 The success story of PM Modi’s ‘Make In India’ which was considered to be contract manufacturing giant – Foxconn, that serves the mobile handset market has put nearly a quarter of its 8,000 staff on paid leave for two weeks hit by severe cash crunch and sluggish demand, an ET report said.

Four of Foxconn's plants in Andhra Pradesh are currently operating at less than half their capacity at "1.2 million a month, down from 2.5 million," a senior industry executive aware of Foxconn's manufacturing told ET. The company has put 1,700 staff on bench or on forced leave.

The report added that other manufacturers including Intex, Lava and Karbonn are either sacking or putting on bench up to 40% of their workforce.

Speaking on the initiatives by Make in India, the government on Sunday night tweeted about its increase in mobile phones and accessories.

#MakeInIndia dials up- 2015-16 saw a 7.1% increase in manufacture of mobile phones and accessories.

Manufacturing woes continue after the withdrawal of higher currency as a report by Nikkei India Manufacturing PMI on December 1 said that this has been the ‘weakest expansion in new orders since July.’

In a previous report by Nikkei the November data highlighted an eleventh consecutive monthly improvement in manufacturing conditions across India, with the headline seasonally adjusted Purchasing Managers’ Index (PMI) at 52.3.

“One factor contributing to the downward movement in the PMI was a softer expansion in new business inflows. Order books rose at a moderate pace that was the slowest since July,” the report said.

Commenting on the Indian Manufacturing PMI survey data, Pollyanna De Lima, Economist at IHS Markit and author of the report, said, “PMI data for November showed that the sudden withdrawal of high-value banknotes in India caused problems for manufacturers, as cash shortages hampered growth of new work, buying activity and production. However, whereas some may have anticipated an outright downturn, the sector held its ground and remained in expansion mode. Furthermore, although many surveyed companies commented that further disruption is expected in the near-term, the demonetisation of the rupee is anticipated to ignite growth in the long-run as unregulated companies leave the market.”