Fulfilling the promise, Chief Minister Adityanath has announced farm loan waiver of Rs 36,359 crore to 2.5 crore small and marginal farmers having loans of up to Rs 1 lakh. 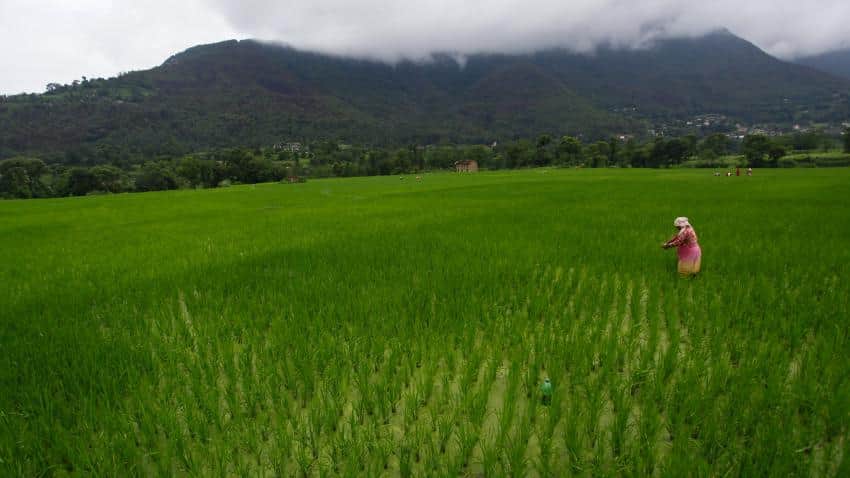 Many economists and Reserve Bank of India (RBI) have said that the move will pose threat on different levels. Photo: IANS
Written By: Pooja Jaiswar
RELATED NEWS

Among many promises of Bharatiya Janata Party (BJP) to Uttar Pradesh during state elections of  2017, was a loan waiver to farmers.

Fulfilling the promise, Chief Minister Adityanath has announced farm loan waiver of Rs 36,359 crore to 2.5 crore small and marginal farmers having loans of up to Rs 1 lakh.

Since the announcement, not only many economists but also Reserve Bank of India (RBI) have said that the move will pose threat on different levels.

Indian Ratings, in its report dated April 06, 2017 said, “While the solution to the agrarian crisis facing the country is not an easy one, providing a debt waiver to farmers will only provide short-term relief to distressed farmers, but will also lead to a bad credit culture, besides exerting pressure on state finances.”

Additionally, the UP government also approved write-off of Rs 5,630 crore of non-performing assets of 7 lakh farmers.

Thus, the direct impact of the debt waiver on the state's exchequer can be around Rs 36,359 crore – which would be 2.6% of UP's gross state domestic product (GSDP).

Few days earlier, same was opposed by Arundhati Bhattacharya, Chairperson of State Bank of India (SBI). She said, "We feel that in case of a (farm) loan waiver there is always a fall in credit discipline because the people who get the waiver have expectations of future waivers as well. As such future loans given often remain unpaid.”

Revati Kasture Chief General Manager, Care Ratings said, “While at present, the waiver has been given in UP only, this is expected to have a ripple effect across some other states wherein such demands have now gained momentum. Thus, this is expected to impact the credit culture in other states too as rural borrowers would stop paying to banks in anticipation of the loan waiver.”

Earlier this week, the Madras High Court directed Tamil Nadu government to waive off loans of all drought-hit farmers and restrained cooperative societies and banks from recovering their dues.

While loan waiver brings 'ache din' for farmers in UP, it is going to hamper non-performing loans (NPLs) of Indian banks further.

Kasture said, “In the past, when there was a waiver of Agricultural Loans by the Central Government, it was observed that NPAs from the Agricultural Loan segment increased in the in subsequent years.” 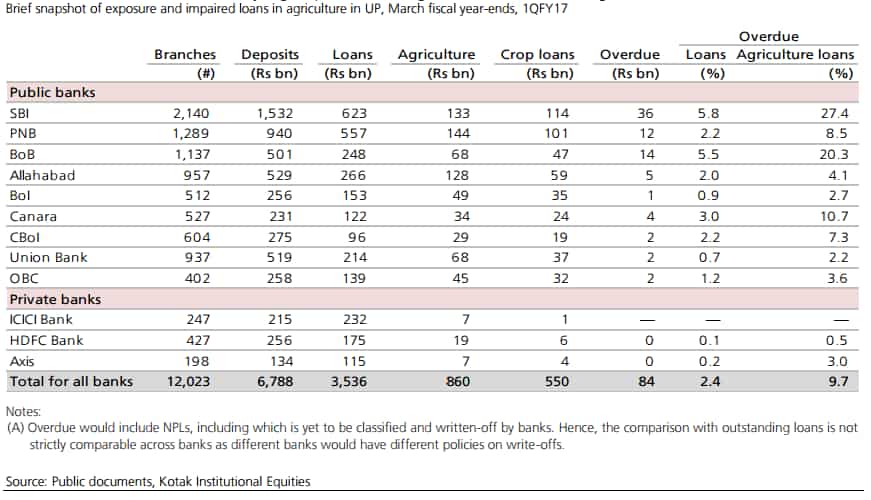 Above mentioned banks  have 10% loans in UP and are mostly in the agriculture sector with a reasonably high share of overdue between 2% - 28% across banks.

Analysts at Kotak Institutional Research, in a report said, "PNB would have the maximum impact from the size of its balance sheet given its strong exposure in this IndoGangetic belt while SBI will have the largest impact given its scale of business."

Abhishek Anand, Fund Manager, Centrum Broking said, “To access the immediate impact on bank’s balance sheet, we need more clarity. One of the impact could be loss on interest income for banks till the loan is transferred and the state clarifies on structure. This assumes that loan book would move from bank’s balance sheet to state government books.”

Anand said, “Such development could be negative for NBFCs that are into unsecured lending to such segments. It also gives wrong signal to non-agri borrowers.”

While Kasture added, “Micro Finance Institutions which have been challenged by the aftermath of demonetisation are also expected to be at the receiving end of farm loan waivers. MFIs have already been facing collection delays in states like UP, Madhya Pradesh and Maharashtra.”

Overall these economists feel such move may appear to be right from a short term perspective but cannot be a permanent solution.