IRCTC: Shares allotted but not showing in the account? Neither allotted nor money refunded? DO THIS

IRCTC: In case your IRCTC shares have been allotted but not transferred into your Demat Account, you should immediately contact Alankit — the official registrar of the IRCTC. 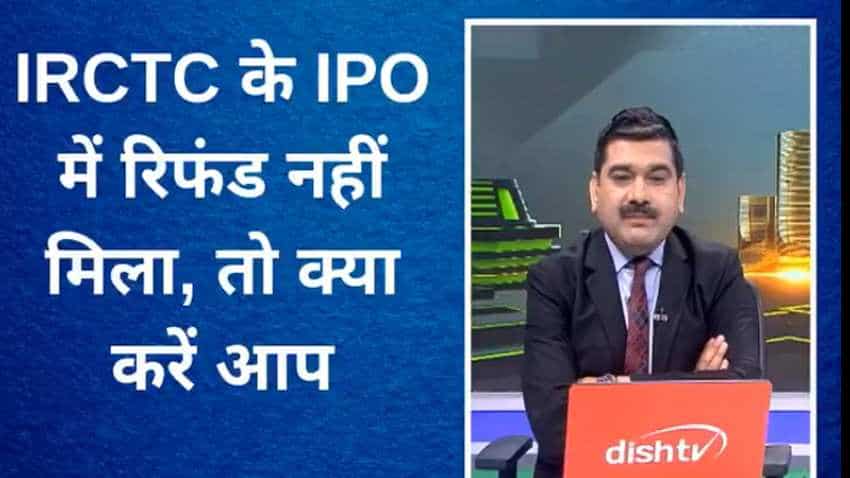 IRCTC Refund: IRCTC's registrar Alankit is responsible for any mistake from the IRCTC side, there are some problems from your payment gateway or bank side also.
Written By: ZeeBiz WebTeam
Edited By: Prashant Singh
RELATED NEWS

IRCTC Refund: The Indian Railway Catering and Tourism Corporation (IRCTC) IPO has been listed today at Indian indices. The Indian Railways Mini Ratna company had a blockbuster IPO listing at Indian bourses, however, there are some problems for the investors also. The problem is with IRCTC refund. A huge number of people had applied for the IRCTC IPO and those who got their name in the list of IRCTC IPO Allotment, many of them are still waiting for the share showcasing in their Demat Account while those who didn't get the IPO are still waiting for the amount back to their bank account. For such people, whose hard-earned money has got choked in the payment gateway or at the IRCTC end, for their convenience Zee Business Managing Editor Anil Singhvi has come up with a step by step guide to get their IRCTC refund in quick time.

Speaking on the Zee Business TV, its Managing Editor Anil Singhvi said, "The IRCTC IPO has been listed today but there is a huge number of people who are waiting for their refund either from the IRCTC or from the payment gateway through which they had paid to apply for the IRCTC IPO. In case your IRCTC share has been allotted but not transferred into your Demat Account, you should immediately contact Alankit — the official registrar of the IRCTC." Singhvi said that one can contact Alankit through various modes of messages like logging in at the official website of Alankit i.e. alankit.com, through email contact by sending an email to Alankit at info@alankit.com. One can tweet to Alankit @AlankitGroup with #JagoInvestorJago. One can directly contact via phone at the Alankit office by dialling at 011-42541234 or 011-223541234.

The Zee Business Managing Editor further added that IRCTC's registrar Alankit is responsible for any mistake from the IRCTC side, there are some problems from your payment gateway or bank side also. If the IRCTC has to refund your amount but it is choked into the payment gateway, then you should either talk to your bank or the UPI payment gateway through which a good number of people have paid while applying for the IRCTC IPO. For UPI payment gateway, one can call directly at their helpline number 1800 1201740 or at 022-45414740. One can raise one's complaint via tweet at @NPCL_BHIM, @UPI_NPCI with #JagoInvestorJago.