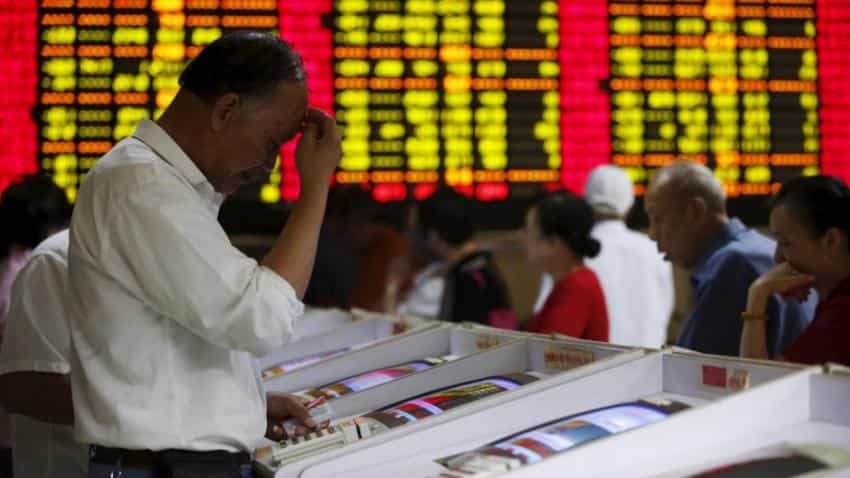 Investors panicked over the prospects of a full-blown trade war between Washington and Beijing. Image source: Reuters
Written By: ZeeBiz WebTeam
RELATED NEWS

#DeshKaZee: Invesco a puppet in China's conspiracy against ZEEL-Sony mega-merger?

The trade war between US and China is escalating and the immediate impact could be seen in China and Hong Kong as Chinese investors dumped stocks across the board on Tuesday. US President Donald Trump threatened China with more tariffs, knocking the Shanghai benchmark to a near two-year low despite government efforts to assuage the panic.

Small-caps were hit harder, with the start-up board ChiNext , and Shenzhen’s SME board tumbling roughly 4 per cent.

Investors panicked over the prospects of a full-blown trade war between Washington and Beijing.

The slump risks triggering fresh margin calls in a highly-leveraged stock market, potentially causing a downward spiral that could derail Beijing’s plan to lure the listings of high-tech giants.

Mainland investors had their first chance on Tuesday to react to rapidly escalating trade tensions between Washington and Beijing after returning from a long weekend. Markets were closed Monday for the Dragon Boat Festival.

On Tuesday, China’s commerce ministry said the country would take “qualitative” and “quantitative” measures, and “fight back firmly” against additional tariff measures by the US government.

The statement came after President Trump threatened on Monday to impose a 10 per cent tariff on $200 billion of Chinese goods, raising the stakes in a tit-for-tat trade war with Beijing. He said the move was in retaliation for China’s decision to raise tariffs on $50 billion in US goods.

Underscoring the impact on Chinese companies from worsening Sino-U.S. relations, shares of ZTE Corp , the technology firm caught in the cross-fire of a trade spat between the two countries, slumped further on Tuesday.

Its Hong Kong-listed shares tumbled 25 percent to a two-year-low in morning trade, while its Shenzhen shares fell by their daily limit of 10 percent for a fourth consecutive session.

US tariffs on Chinese products including steel, aluminum, and those that benefit from China’s industrial development subsidy programmes including the “Made in China 2025” technology upgrade plan, could hurt a broad number of China-listed companies, said Shanghai Wisdom Investment’s Dai.

Further market falls could also trigger a vicious cycle of selling, as a large proportion of shares in the stock market are pledged against loans, and could potentially face margin calls, he said.

#DeshKaZee: Invesco a puppet in China's conspiracy against ZEEL-Sony mega-merger?