Investing to get rich? These five stocks may help you

For the week ahead to watch, markets to remain closed on August 12th and August 15th on account of Bakri Id and Independence Day respectively. 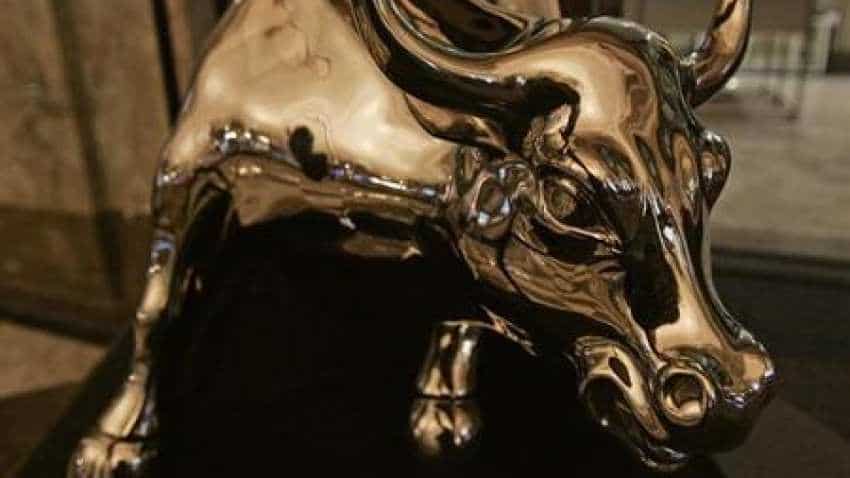 Equities give much higher return than any form of traditional investments. Photo: Reuters

Last week ended on a positive note with Sensex just a couple of points away from clocking 38,000-mark and Nifty50 soaring above 11,100. On Friday, Sensex finished at 37,581.91, above 254.55 points or 0.68%. Before the end of trading hours, Sensex also clocked an intraday high of 37,807.55. On the other hand, Nifty50 ended at 11,109.65 up by 77.20 points or 0.70%. On this day, stocks like Maruti Suzuki, Bajaj Finance, Vedanta, HDFC Bank, Hindustan Unilever and Kotak Mahindra Bank made many investors rich by soaring above 2% to over 4%. The markets are always changing. Hence, grabbing the right opportunity for becoming rich is the key. Equities give much higher return than any form of traditional investments.

In the coming week, markets will remain closed on 12th August and 15th August on account of Bakrid and Independence Day respectively.

Karvy Stock Broking said in a research note that during the week, market participants may lay their focus on CPI (YoY) (Jul), Cumulative Industrial Production (Jun), Industrial Production (YoY) (Jun), Manufacturing Output (MoM) (Jun) data releasing on 12th Aug and on WPI Inflation (YoY) (Jul) data which may actively determine the course of the next market direction. On the derivatives front, Open Interest data suggests that the index may find its support around 11100 followed by 11000 levels while on the higher side, 11200 and 11500 may act as strong resistance.

But these five stocks can always be your best bet for earning hefty returns on Dalal Street. Here’s a list recommended by Karvy Stock Broking analysts in their research note.

1. Bata India - BATAINDIA in the week passed by closed with a gain of nearly 8.86%, whereas benchmark index NIFTY MIDCAP 50 has closed with a gain of 0.97%, clearly indicating the outperformance of the said stock. On the price charts after making a swing high of around 1460 levels the stock has corrected towards its 200 EMA and found support around the same resumed its uptrend, indicating smart buyers present at lower levels. The momentum indicators like 14 period RSI on the weekly and daily charts is trading above its signal line indicating a bullish bias in the near term. On the derivatives front, the stock has seen long accumulation in the last week with Open Interest increasing by 9.54% and price increasing by 8.86%. Hence, recommend Smart Traders to initiate long position near 1425 levels for the higher target of 1485 levels, keeping a stop loss of 1389 levels.

2. Dabur India - DABUR has closed the week with a positive return of around 3.62% and outperformed NIFTY FMCG significantly. The stock is in uptrend as it is making higher high and higher low on the daily chart. The stock is trading well above 21/50/100/200 DEMA levels on daily as well as weekly chart indicating strength in the counter for all major time frames supporting our bullish bias. On momentum oscillator front, the 14 period RSI is pointing northwards and sustaining well above the signal line on a daily and weekly chart as well, which indicates strength in the stock. Expect the stock to outperform in the near term. Hence, recommend Smart Traders to initiate long position on dips around 435 levels with a stop loss placed below 420 for the target of 452 levels.

3. ICICI Prudential - ICICIPRULI is trading in a narrow range with a positive bias on daily chart with formation of higher lows on daily candles for the previous week. Also the stock is in the formation of ascending triangle pattern on daily chart and is on the verge of a breakout from this triangle with possible upside of 5-6% on immediate effect. On daily chart, the stock is placed above all its major moving averages indicating inherent strength. The immediate strong support is placed at 380-378 levels which is also its 50-DEMA and strong buying has been witnessed in the past whenever the price reaches the zone. ) The stock price has recovered from the lower band and is currently placed above the mean affirming the bullishness in the counter. Hence, recommend Smart Traders to initiate a long position near 392 levels for the higher target of 410 levels keeping a stop loss of 380 levels for the near future.

4. Kotak Mahindra Bank - KOTAKBANK has witnessed a consolidation range breakout of 1460-1515 on the back of increase in average traded volumes on daily chart. Even on daily chart, the stock is placed above its major moving averages after re-testing its support zone which even collides with the 50 DEMA, suggesting it to be a strong support for the counter. Even the stock has witnessed trending slope line breakout on closing basis and on derivatives front, the stock has witnessed short closure in past week suggesting strong hands accumulating the counter at lower levels. Hence it is advisable to go long in the counter on any dip towards 1518 keeping a stop loss placed below 1460 levels, for the potential upside target of 1580 levels in coming trading sessions.

5. Siemens - SIEMENS has bounced from the support zone of 1100 levels post consolidation on the back of robust volumes indicating it to be a strong reversal signal for the counter and has retracted over 50% on weekly chart suggesting trend reversal in the counter. On daily chart, the stock is placed above its long term moving averages indicating inherent strength. On derivatives front, the stock has witnessed long addition in the past week and short closure in last few trading sessions suggesting strong hands accumulating the counter at lower levels. Hence, it is advisable to go long in the counter on any dip towards 1155 keeping a stop loss placed below 1115 levels, for the potential upside target of 1200 levels in coming trading sessions.