To mark the celebrations of fifth International Yoga Day, Prime Minister Narendera Modi performed yoga along with around 30,000 people in Ranchi on Friday. 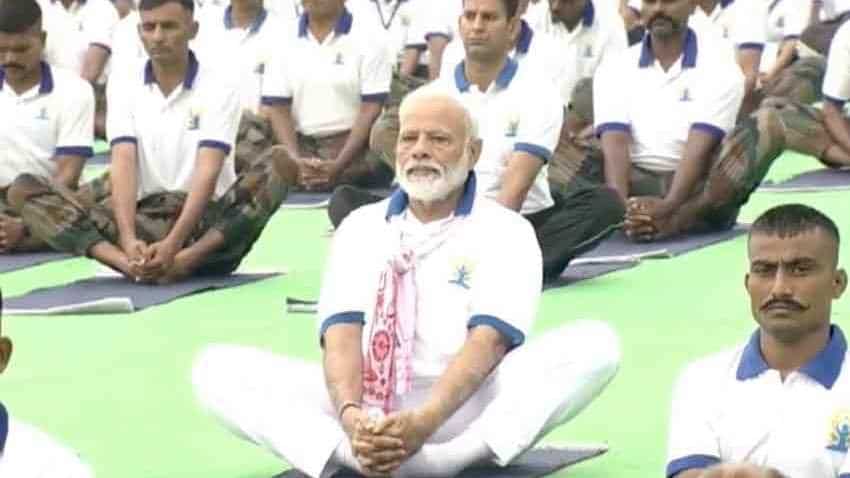 Addressing people ahead of the session, PM thanked them for their support and urged them to embrace yoga. Source - BJP Live.

To mark the celebrations of fifth International Yoga Day, Prime Minister Narendera Modi performed yoga along with around 30,000 people in Ranchi on Friday. The session, which continued for around 45 minutes at the Prabhat Tara ground, was conducted by M Baswa Reddy, director of the New Delhi-based Morarji Desai National Yoga Institute. Addressing people ahead of the session, PM thanked them for their support and urged them to embrace yoga. "Yoga has always been associated with peace and harmony. I thank people for adopting Yoga. I urge people to embrace it," the prime minister said.

He also spoke in English for a few minutes to reach out to the global audience. "Yoga is beyond caste, religion, region and any boundaries", PM Modi said, while adding, "There is a solution to alcoholism and diabetes in Yoga". Different forms of yoga postures, including how to control blood pressure and strike metal peace, were performed.

"This year, Yoga`s theme is Heart Care. There has been a manifold increase in the heart-related problems in the country, particularly among the young generation. Yoga should be adopted as preventive measure," the Prime Minister added. After the session was over, the Prime Minister spent time with the participants, where children and youth even clicked selfies and shook hands with Modi.

Meanwhile in Delhi, over 18,000 individuals took part in an event organised in Rajpath. The participants included Defence Minister Rajnath Singh. President Ram Nath Kovind, who took part in an indoor event in Parliament, said in a tweet: "On #InternationalDayofYoga best wishes to all practitioners of yoga across the world. Yoga is India`s gift to humanity; it holds the key to healthy living and to that fine balance between mind and body. Do become a part of the celebration of yoga."

In another event organised by the South Delhi Municipal Corporation (SDMC), Union Minister Piyush Goyal and MP Manoj Tiwari along with several other hundred participants performed yoga at the Talkatora Stadium. The Delhi Police also marked the day at the Thyagaraj Sports Complex, where the chief guest was Amulya Patnaik, the Commissioner of Police, Delhi.