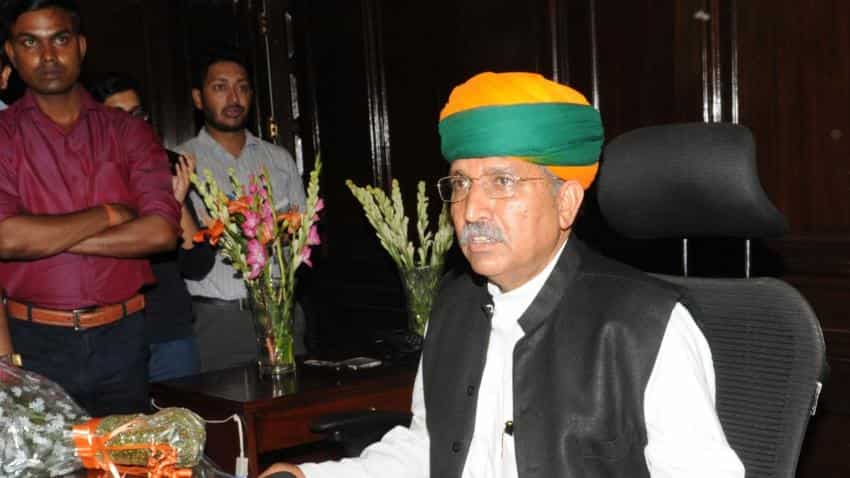 Arjun Ram Meghwal interacts with the media after taking charge as Minister of State for Finance, in New Delhi on July 6, 2016. Image Source: IANS/PIB

The rates of interest and tax will soon come down mainly due to the demonetisation drive of the government, Minister of State for Finance Arjun Ram Meghwal said on Saturday.

The minister was speaking at a conference of Laghu Udhyog Bharti, in which industrialists of Jammu region participated to discuss issue of goods and services tax (GST) regime and future of small-scale industry in the region.

The minister also hit out at the opposition for disrupting Parliament proceedings over demonetisation of Rs 1,000 and Rs 500 currency notes.

"Government is ready to discuss the issue in Parliament but opposition is behind all this. First opposition demanded debate in Parliament ... We started discussion on November 16. It started in Rajya Sabha", he told reporters in Jammu.

"But contrary to it, Opposition said that the debate in Lok Sabha should be held as per rule and we told them you started debate in Rajya Sabha so commence it in Lok Sabha too," he said, adding after a day-long debate they told us the Prime Minister should come to house.

"When Prime Minister came to house, after a brief discussion when Dr Manmohan Singh spoke on it, they demanded PM should sit in the house, otherwise there would be no debate. When he sat in the house, they demanded he should apologise ... Who is stalling the proceedings of the houses. It is the opposition," he said.

"By next week there would be solution to be taken out by the Speaker of Lok Sabha and the Chairman of Rajya Sabha", he said.

On GST implementation, he hoped that Jammu and Kashmir (J&K) would implement the GST with passage of the bill in the Legislature.

"We will develop a consensus over GST as a few states are opposing it," he said.

Speaking on the occasion, the Union Minister urged the local industrialists to explore huge potential available in the defence, public sector unit (PSU) manufacturing sector adding that collaboration between the Army and local industry can help in the economic development and growth of the state.

He asked the local industrialists to explore new and market-intensive areas for growth and employment generation.

The Minister said that the Prime Minister Narendra Modi-led government is determined for regional balance and focusing on overall development of the country.

Responding to the demands put forth by the Laghu Udyog Bharti J&K, and Federation of Industries Jammu, the Minister assured them that all their genuine demands would be considered in upcoming union budget.

The demands presented by the federation include provision for relief to industrial sector of J&K under GST regime, tax holiday to industry and development of new infrastructure.

Federation of Industries Jammu also demanded that the present Excise Duty Incentive with 100% Refund and VAT Remission to Industry in J&K should be continued under the GST Regime at par with North Eastern States.

J&K Industries and Commerce Chander Parkash Ganga said that there is need for further growth in industrial sector in the state to generate employment avenues for youth.