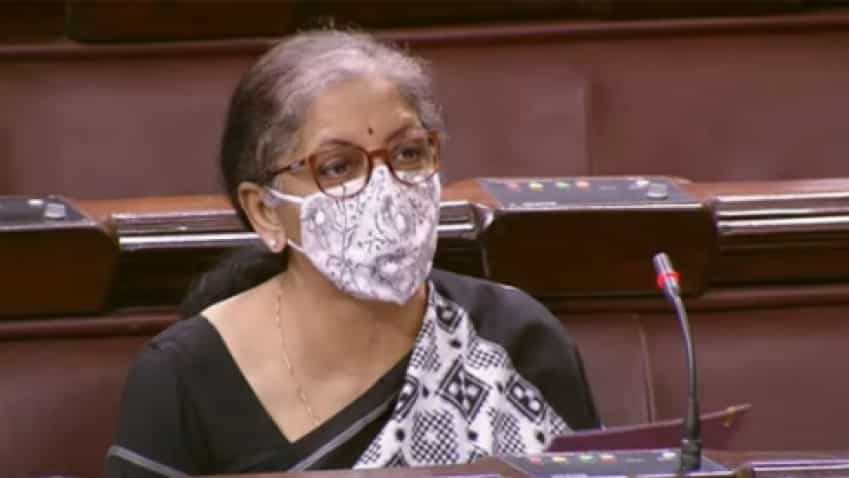 Sitharaman also clarified that insolvency proceedings against corporates defaulting on loans prior to March 25 will continue and the amendment will not stall those cases. Photo: IANS
Written By: PTI
RELATED NEWS

Finance Minister Nirmala Sitharaman on Saturday said law provides for carrying out insolvency and bankruptcy proceedings against corporate debtors as well personal guarantors together. She was replying to a debate on the Insolvency and Bankruptcy Code (Second Amendment) Bill, 2020, in the Rajya Sabha which passed the proposed legislation to replace an ordinance in this regard with voice vote.

In June, an ordinance was promulgated to amend the Insolvency and Bankruptcy Code (IBC) whereby fresh insolvency proceedings will not be initiated for at least six months starting from March 25 amid the coronavirus pandemic.

Default on repayments from March 25, the day when the nationwide lockdown began to curb coronavirus infections, would not be considered for initiating insolvency proceedings for at least six months.

The minister also clarified that insolvency proceedings against corporates defaulting on loans prior to March 25 will continue and the amendment will not stall those cases.

On members' queries about urgency to bring the ordinance in the first place, Sitharaman said that "between sessions if there is a need for ordinance because the ground situation demands it, I would think a responsive government's duty is to at least use the ordinance to show that we are there with the people of India."

"So to that extent I am sure the House will appreciate that as and when the government decides for ordinance it is because of that, and whenever the next session happens we come back," she said.

Because of the COVID-19 pandemic, the minister said, businesses faced trouble.

So it was decided "that it was better to suspend Sections 7, 9 and 10 of IBC so that we can prevent corporate persons, which are experiencing distress on account of the unprecedented situation, being pushed into insolvency proceedings".

Sections 7, 9 and 10 deal with initiation of corporate insolvency resolution process by financial creditor, operational creditor and corporate debtor, respectively.
The minister further said the IBC is a critical part of business now, and cited data to show how the code had performed.

Citing data for NPAs of commercial banks during 2018-19, she informed the House that Lok Adalats recovered 5.3 per cent, Debt Recovery Tribunals (DRTs) recovered 3.5 per cent and SARFAESI recovered 14.5 per cent.

On the other hand, IBC ensured 42.5 per cent of recovery.

Sitharaman further said that most of the resolutions are happening to make the company to be a going concern only.

"Priority is to keep the company to be a going concern rather than to liquidate them at the earliest," she said adding that 258 companies were saved from going bankrupt through the IBC process, while 965 firms went for liquidation.

"...258 companies were rescued which means employment is back again with them. Companies which have been liquidated in total, three-fourths of them were defunct and were also given liquidation solution and therefore at least loss of employment was reduced," she said.

So in value terms, the assets rescued were about two and a half times of the assets which went to liquidation, Sitharaman said.

The IBC, which came into force in December 2016, has been amended five times.

The amendment provides for suspension of Sections 7, 9 and 10 of the IBC for at least six months and extendable up to one year from March 25, 2020. In this regard, a new section '10 A' has been inserted in the IBC.

Louisiana hunkers down as storm Zeta takes aim at state