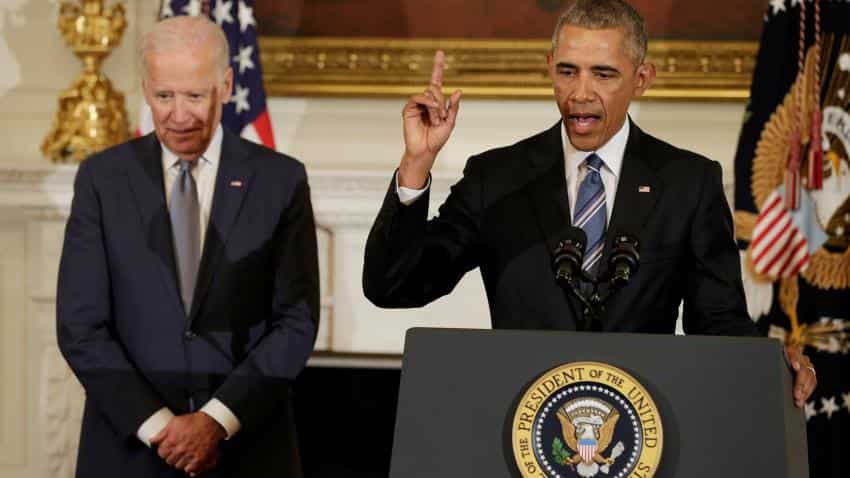 As a political appointee, Biswal's term at the State Department ends on January 20 along with that of Barack Obama as US President when Donald Trump would succeed him as the 45th President of the US. Image Source: Reuters
Written By: PTI
RELATED NEWS

The Obama Administration has asserted that the Indo-US "strategic convergence" is at its highest point, as it hoped that the incoming Trump government would continue to prioritise the bilateral partnership of "paramount importance" to address global challenges.

"I want to say, particularly (as) I sit in this position in the Department of State, the strategic convergence between the United States and India is at the highest point that it has ever been," Assistant Secretary of State for South and Central Asia Nisha Desai Biswal told PTI in an interview.

"We see that by large we share a world view and we are now increasingly therefore talking to each other about challenges that we see as well as opportunities," she said.

As a political appointee, Biswal's term at the State Department ends on January 20 along with that of Barack Obama as US President when Donald Trump would succeed him as the 45th President of the US.

"The US-India relationship is built on a number of fundamentals that I think are consistent. We have a set of values, for democracy, for a pluralistic society, for a free society," Biswal said.

"We have a number of shared goals, objectives and inheritance to a rule-based international order, a desire to advance through peace and a focus on a shared prosperity," she said.

Biswal said she believes that these fundamentals would continue to define the Indo-US relationship.

"The next administration coming in, comes in with an understanding and appreciation for the important role that India has played and the increasingly consequential role that India will play on the global scene.

And that a US India partnership therefore is of paramount importance to those countries in advancing those shared goals and interests," she asserted.

"We have certainly seen that in how President Obama has approached this relationship. It's a relationship that Barack Obama came in on day one focused on and in seeking out to Prime Minister Manmohan

This is because, for Obama, he has seen the important role that India has played and will play moving into the future, she noted.

"The world's oldest and largest democracies that have so much in common should make common cause in advancing both our own goals and for US and for India and for also how we work together to address global challenges," Biswal said.

"And so I think, the next administration coming in for all of those reasons would continue to prioritise the relationship with India," she said, adding that strategic convergence is the key highlight of the India-US relationship during the Obama Administration.

"What we have tried to do that through strategic ones is to make sure that when we are pursuing policies and actions that we believe would either impact India or where India can play a role in trying to advance, we call, we talk, we engage and we share and bring India into that conversation. So this is not one of those easily visible and explainable outcomes," she said.

"But the quality that is most important which is less visible to the outside eye is the fundamental shift in how we see each other on our strategic relationship and the fact that a Secretary of State will pick up the phone immediately on important issues, oh, I have got to check in with my Indian counterpart on this issue and make sure that it is ok with them. That's what I have hoped would transpire and that's where we are today," she added.

Indian-Americans, she said have played a key role in the bilateral relationship.

"The role Indian Americans have played, is both during times when India was little understood and not as prominent globally and now during times when India is much more a leader and a driver across the world. Indian-Americans have sought to bring greater understanding of that relationship and support for that relationship," she said in response to a question.

"So for me as an Indian-American, who both understands where I want my country to go and what the goals and interests are of the United State and also know what it is that will appeal to the Indian ear, what they need to hear from us on how we engage with them, with respect, with dignity, with understanding, with appreciation for all of the complexities that are in India. That I believe has been the added value that I have been able to bring in trying to deepen the relationship," Biswal said.

"I think there will be prominent Indian-Americans that I am sure will play that role for the next administration as well," Biswal said.