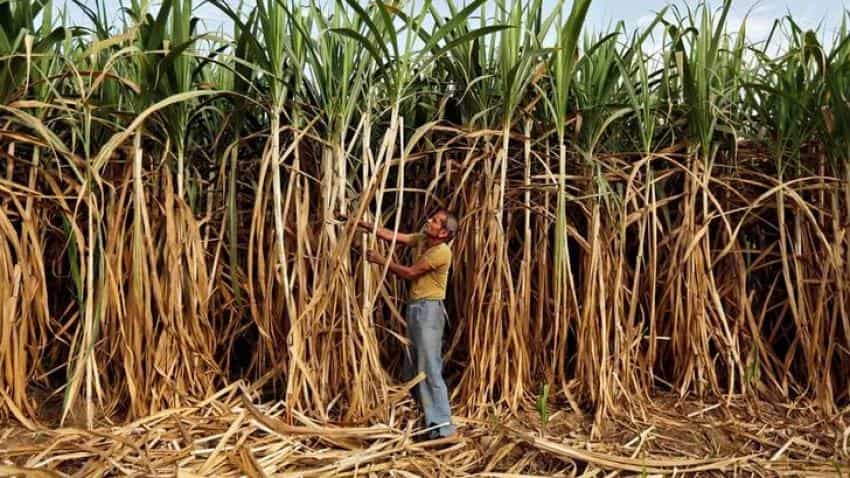 A farmer works in his sugarcane field on the outskirts of Ahmedabad. Image Source: Reuters
Written By: Reuters
RELATED NEWS

India`s sugar production in 2016-17 is likely to fall to 22 million tonnes (MT), down 4.3% from an earlier estimate, as mills in its key producing state are closing early due to a cane shortage, industry officials told Reuters.

A drop in production below India`s consumption of around 25 million tonnes (MT) could lift local prices and prompt the world`s second-biggest consumer to allow duty-free imports of the sweetener, supporting global prices that are trading near their highest level in one-and-half months.

In the last two years, back-to-back droughts have ravaged the cane crop in Maharashtra, the country`s top sugar producer.

"The impact of drought was much more severe in Maharashtra than we anticipated. The state could end up with production of around 4.5 million tonnes (MT)," B B Thombre, president of the Western India Sugar Mills Association (WISMA) told Reuters on Thursday.

As Maharashtra`s output has been revised down, the country`s total production could fall to 22 million tonnes, Thombre said.

Sugar mills in Maharashtra typically operate between November to April, but this year so far 25 mills have stopped crushing due to lower cane supplies.

"Some sugar mills have already closed operations due to cane shortage and most mills will close operations by February end," said Sanjeev Babar, managing director of the Maharashtra State Co-operative Sugar Factories Federation, on Wednesday.

Local sugar prices are moving up on an expected shortfall in output and could prompt the government to allow duty free imports of the sweetener, a Mumbai-based dealer with a global trading firm said on Wednesday.

"Ahead of state elections the government will try to keep a lid on prices. Right now, it is more interested in protecting consumers than farmers," the dealer said.