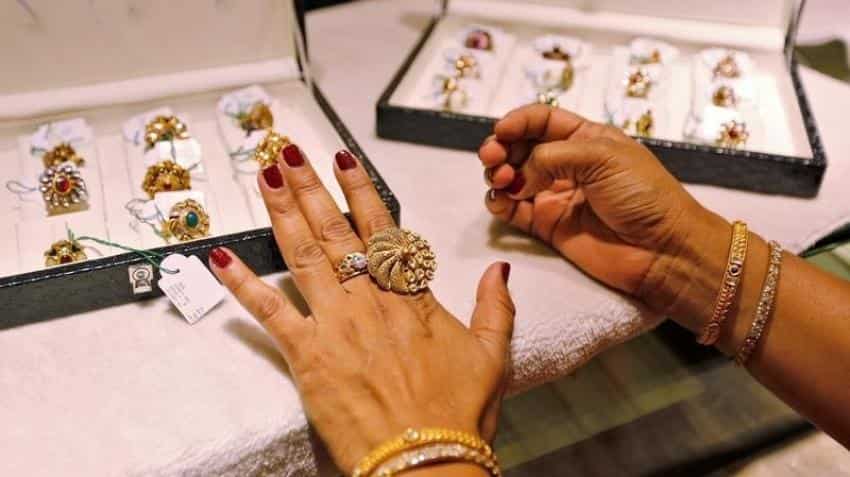 A woman tries on a gold ring inside a jewellery showroom on the occasion of Akshaya Tritiya in Ahmedabad. Image Source: Reuters
Written By: Reuters
RELATED NEWS

India's crackdown on undisclosed foreign assets and income is curbing demand for gold in the world`s second-biggest consumer, while rising real interest rates and better returns from other financial markets are also hurting purchases, a banker said.

Although consumption should pick up from now until the end of the financial year, when India buys more for gifting during festivals and weddings, weak demand so far has dragged on the global gold price that has shed nearly 9 % from a two-year high in July to $1,258 an ounce on Tuesday.

"There is a crackdown on black money in India and many people who were looking at gold as an investment for unaccounted income are no longer investing in gold at all," Shekhar Bhandari, executive vice president of Kotak Mahindra Bank, told Reuters on the fringes of an industry meet.

Unofficial estimates suggest funds illegally deposited in banks outside the country to avoid tax, known as "black money" in India, account for about 10-30 % of the country`s gold demand, said Bhandari.

India`s gold demand has also been hit by higher returns from other asset classes, Bhandari said, with returns on equities and bonds at 12-13 % dwarfing gold`s 0.9 % in terms of rupees since 2013.

"The returns on gold in rupees is pathetic," Bhandari said.

"I think it won`t be advisable to invest in gold given current levels where investment returns are likely to be negative in Indian rupees."

But imports in the second half of India`s financial year to March will probably be 25-50 % more than the first half, said Sunil Kashyap, managing director for global banking and markets at Scotiabank.

"With Diwali just about two weeks away from now, demand so far looks good. Expectation is that it`ll sustain until the end of the year," Kashyap said.

"If stability of the rupee continues and gold prices are stable, then we can expect positive trends. But any kind of volatility could hamper gold," said Scotiabank`s Kashyap.