Indian rupee hits all-time closing low of 68.79 vs US dollar

The macroeconomic picture of India appears to be caught in a recurring instability against the backdrop of surging global crude prices and consistent widening in the trade deficit as well as increased pressure from capital outflows, all these leading to largely forex market turmoil. 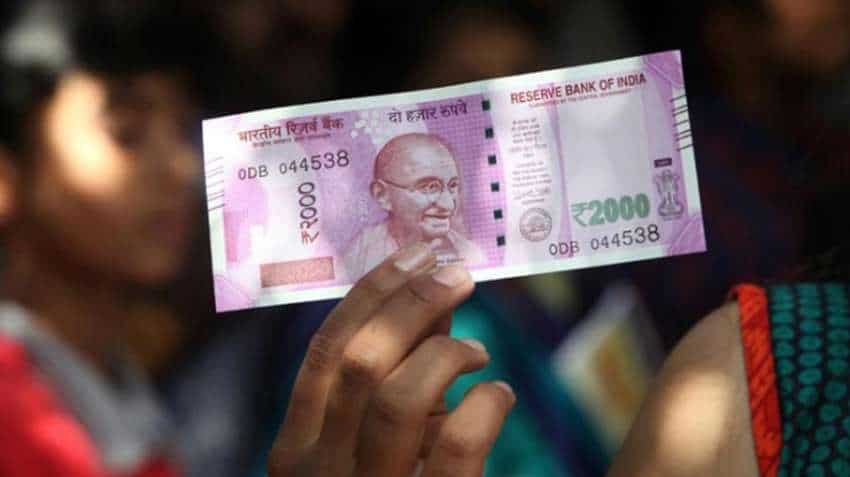 The beleaguered Indian rupee crashed to breach the key psychological level of 69 in the morning trade and slipped further to hit a life-time low of 69.10, a fall of 49 paise during the volatile session today. Image source: Reuters
Written By: PTI
RELATED NEWS

Continuing its free fall for the fourth straight session, the Indian rupee today hit a record closing low of 68.79, showing a fall of 18 paise against the US dollar due to multiple headwinds like weak global cues and concerns related to inflation and fiscal slippage.

The domestic currency's previous all-time closing low was 68.73, touched on November 24, 2016. The beleaguered Indian rupee crashed to breach the key psychological level of 69 in the morning trade and slipped further to hit a life-time low of 69.10, a fall of 49 paise during the volatile session today.

"Weak global cues and rising oil price continued to impact domestic market sentiment while rupee declined to all time low amid concern on inflation and current account deficit... Any intervention from RBI to contain the volatility in rupee and progressing monsoon will provide some respite to domestic market in the near term," Vinod Nair, Head of Research, Geojit Financial Services Ltd, said.

Mad rush for dollar was witnessed as importers see further erosion in the rupee value even as it was a field day for speculative traders before the RBI came in strongly, pumping million into the market to salvage the rupee.

The rupee swung between 69.10 and 68.72 most part of the day at the interbank foreign exchange (forex) market after a gap-down opening at 68.89.

The macroeconomic picture of India appears to be caught in a recurring instability against the backdrop of surging global crude prices and consistent widening in the trade deficit as well as increased pressure from capital outflows, all these leading to largely forex market turmoil.

The world's fastest-growing major economy benefited the most from low oil prices in the recent past. Massive unwinding by foreign investors in local equity and debt markets due to change in the nation's macroeconomic environment also dampened overall forex market sentiment.

So far this year, foreign investors have sold a combined USD 7 billion in equity and debt markets.
An internal factor that has impacted the rupee includes a massive trade balance deficit and declining level of foreign direct investment (FDI).

Highly volatile local equities in the midst of option expiry along with overwhelmingly bullish dollar versus major currencies also weighed on the trading front.

The Indian rupee, which strengthened 5.96 per cent against the US dollar last year, has been on a general downtrend since April this year.

Global crude prices revisited the highest level in more than three years overnight, as threats to global supply loomed large in the midst of economic and geopolitical turmoil in Venezuela amid fresh sanctions on Iran even as major oil exporters increased production.

Brent crude futures, an international benchmark, is trading sharply up at USD 78 a barrel, in early Asian trade.

Oil prices have been rallying for much of 2018 on tightening market conditions due to record demand and voluntary supply cuts led by the Middle East-dominated producer cartel of the Organization of the Petroleum Exporting Countries (OPEC).

Additionally, the outlook for global liquidity is drying up as world central banks are preparing for a gradual withdrawal from unconventional monetary policies - a clear tightening for emerging market economies including India.

The US Federal Reserve was the first to initiate this process by scaling down its QE (quantitative easing) programme and starting to increase interest rates in the US.

India has been hampered by a rapid surge in global crude oil prices and can play havoc with the country's fiscal arithmetic, a forex dealer commented.

The RBI, meanwhile, fixed the reference rate for the dollar at 68.9389 and for the euro at 79.6382.
Globally, the dollar was trading near eleven-month high against a basket of the other major currencies.
The dollar index, which measures the greenback's value against basket of six major currencies, was up at 95.05.

In the cross currency trade, the home currency edged lower against the euro and finished at 79.71 as compared to 79.70, but held steady against the Japanese yen at 62.41 per 100 yens earlier.

The local unit, however staged a rebound against the pound sterling to end at 90.05 per pound from 90.45.
The bond market also came under heavy selling pressure after RBI painted a gloomy picture of the banking sector in its bi-monthly financial stability report and also tracking overall weakness in domestic currency.
The 10-year benchmark bond yield shot-up to multi-year high at 7.94 per cent.

In forward market today, premium for dollar remained weak due to sustained receiving from exporters. The benchmark six-month forward premium payable in October moved down to 96.50-98.50 paise from 97.50-99.50 paise and the far-forward April 2019 contract edged lower to 243-245 as against 244-246 paise on Wednesday.