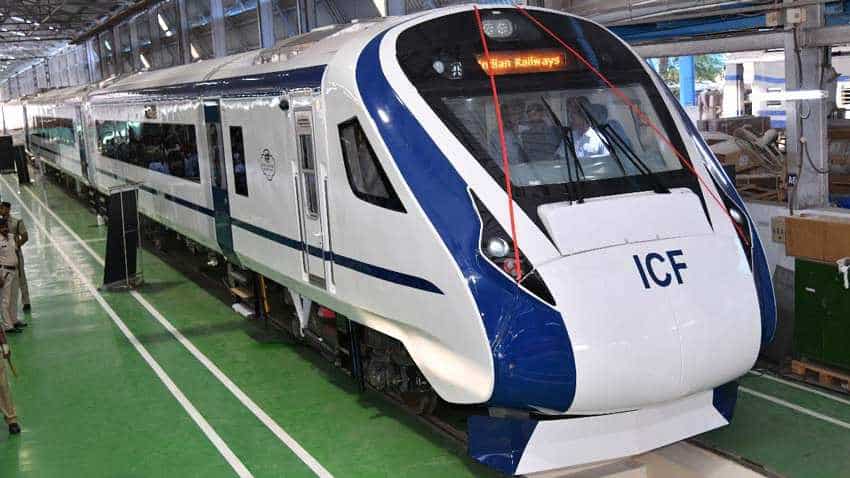 The first coach of the 16-coach train began to be built on 9th February 2018.

Indian Railways Integral Coach Factory in Chennai has rolled out the Train 18 on October 29. The train has already reached Delhi and will now be put on trial before certification is granted. This special, engine-less, train packs onboard features like onboard Wi-Fi and very comfortable seating. All toilets are vacuum type, identical to those in aircraft. The lighting is dual mode, viz. diffused for general illumination and personal for every seat. Every coach has a pantry with a facility to serve hot meals and hot and cold beverages. The insulation is meant to keep heat and noise to very low levels for additional passenger comfort.

The Train 18 will undergo trials on two levels. In the first stage, the train will run at a speed of 120 kmph.

"Medium speed trial of Train-18 will be conducted between Moradabad and Bareilly over the next few weeks.  These tests will be done at a maximum speed of 120 kmph and will lead to certification of performance and safety of the train. Vast instrumentation has been provided on the train by RDSO for this purpose. These tests will certify that Train-18 is fit on all tracks of Indian Railways at a speed of 110 kmph," informed the ICF PRO GV Venkatesan.

In the second stage, the train will undergo trial at the speed of 180kmph.

"High-speed trials will be done between Kota and Sawai Madhopur after the Moradabad trials. These trials will be done a maximum speed of 180 kmph and will certify 160kmph operational capability of the train apart from safety features and reliability at this speed," he said.

Venkatesan said it is expected that these trials will be completed before the end of this year so that the train can be put into service for the Indian public.

"The impact of this train, matching global standards of performance, safety and passenger comfort and yet costing less than half of global prices, has the potential to cause major upheaval in the world train business," he said.

The indigenous design of the Train 18 has the potential to shake up the high-speed train-building industry of the world, claims the ICF.  It said that the train, though designed for a maximum speed of 160kmph has the potential to go up to 200kmph if matching track, Over Head Equipment and signaling infrastructure is in place.

The train is equipped with travel classes identical to a Shatabdi Train. It aims to provide a totally new travel experience to passengers.

The first coach of the 16-coach train began to be built on 9th February 2018. The train, fully assembled was on track in October,  2018 and was ready for testing in a record time of 18 months. It takes around 36 months to make such a train anywhere in the world.