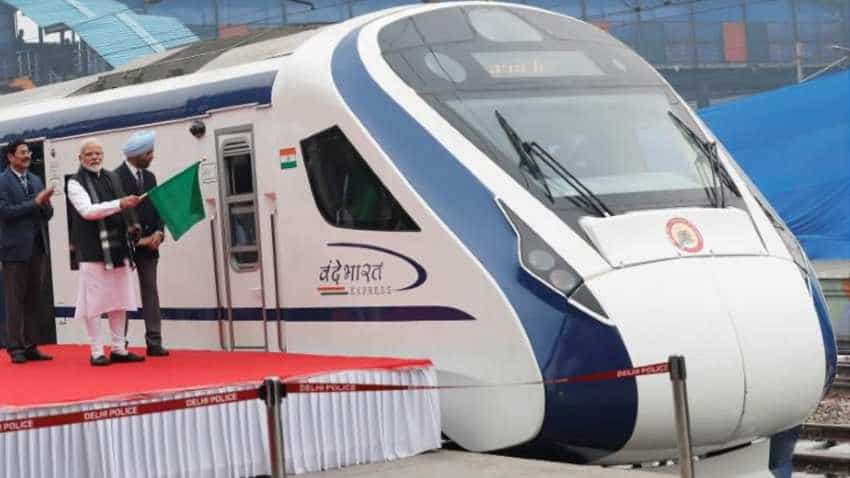 The trial run between Delhi and Katra was completed earlier this year in July. Source - Reuters.
Written By: ZeeBiz WebTeam
Edited By: Harish Dugh
RELATED NEWS

"I am extremely happy to inform that the trial run of second 'Make in India' Vande Bharat Express train from New Delhi to Katra, the shrine of Maa Vaishno Devi, has been completed," Railway Minister Piyush Goyal tweeted on Wednesday. "This train will be started commercially for Maa Vaishno Devi pilgrims in Navratri. Jai Mata Di", he added.

The trial run between Delhi and Katra was completed earlier this year in July. The train had started from Delhi at 6:00 am and was scheduled to reach Katra at 2:00 pm with the total journey time of just eight hours. Notably, the train reached Katra station just three minutes late, at 2:03 pm, from its scheduled time. However, on the way, it reached several stations before the scheduled time.

This is not the only major step taken by the Indian Railways for the festive season. Earlier this week, it had announced special trains keeping in mind the need during the festive season - Durga Puja, Diwali and Chhat. Eastern Railway said in a statement that it will run eight pairs of weekly Puja special trains between Malda via Sultanpur and Malda-Haridwar. The passengers on Haridwar-Malda, Gorakhpur-Howrah, and Howrah-Chhapra routes will benefit from these trains.

These trains are expected to start their operations in the first week of October 2019. The passengers will be able to book tickets for these trains through IRCTC website or at the Railway reservation offices. They can also get the updates on these trains on Railway websites. According to the information available, Howrah-Gorakhpur special train is expected to be operated from October 4, while the special trains on Malda Town-Haridwar and Howrah-Chhapra routes are likely to begin the journey from October 7.