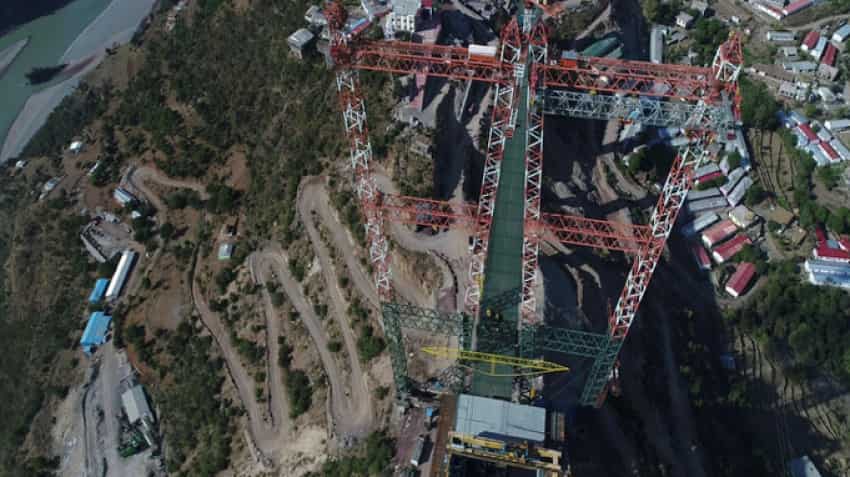 Chenab bridge has a height of 359m above river bed and having 467m of single arch span across mighty Chenab river. Image: Quora/@Piyush-Goyal
Written By: Rajeev Kumar
RELATED NEWS

Indian Railways' quest to reach each and every part of the country is not yet over. 70 years after Independence, there are still many parts untouched, with some of them challenging the best of civil engineering minds of the country. Nevertheless, the Indian Railways is on an unstoppable building spree, taking up massive projects that could bring praise to India from across the world. Here's is a look at 5 big projects, sharing which on Quora, Union Railway Minister Piyush Goyal said these projects "depicts the opportunity, skill, scale and strength of civil engineers working in Indian Railways."

Here are the 5 projects:

For the construction of the bridge, the asymmetrical cable-style bridge was chosen as "it was most suitable from an engineering point of view due to one side of the bridge being located on unstable ground and the other side on stable ground," Goyal said.

The ambitious and one of the most challenging projects of the Indian Railways' aims to construct a tunnel on Katra-Banihal section of the Jammu-Udhampur-Katra-Quazigund-Baramulla Railway line. Spread over 12.7Km, this is to be the longest transportation tunnel in India.

Goyal said that the execution of the tunnel is being done using the new Austrian Tunneling Method. However, constructing the tunnel is not easy. Goyal said, "Tunnel alignment negotiates extremely difficult geology of Himalayas, in which the terrain is rugged, remote and inaccessible and is devoid of basic infrastructure facilities, making the project extremely challenging."

The bridge is being constructed to connect Jiribam to Imphal in Manipur, which borders with Myanmar. It spans across the valley of river Ijai near Noney, with a height of 141m. This is to be the World’s Tallest Rail Girder Bridge pier, surpassing the existing record of 139m of Mala-Rijeka viaduct, Montenegro. The project is expected to be completed by December 2019.

The Chenab bridge has a height of 359m above the river bed, with a 467m of single arch span across the mighty Chenab river. It is located near the Salal Hydro Power Dam. Overall, the length of the Chenab bridge is 1315 m. The main arch portion across Chenab river is of 467m length.

Chenab bridge will be the highest Railway Arch Bridge in the world, 35 metres higher than the iconic Eiffel Tower in Paris. The Chenab bridge is expected to be completed by July 2019. Around 75% of the project has already been completed.

To connect the Kashmir Valley with the rest of the country, the Indian Railways have undertaken the work of Jammu Udhampur Srinagar Baramulla Rail Link Projects, where a railway line (total length 345kms) is being constructed.
Goyal said, "The bridge is an engineering marvel having very high rectangular, tapered hollow piers, spanning about 490 metres." Bridge No 39 will be about 95 metres high and 22 metres taller than the Qutub Minar of New Delhi.
The construction of the pier was completed in record 38 days despite several geographical and climatic challenges.