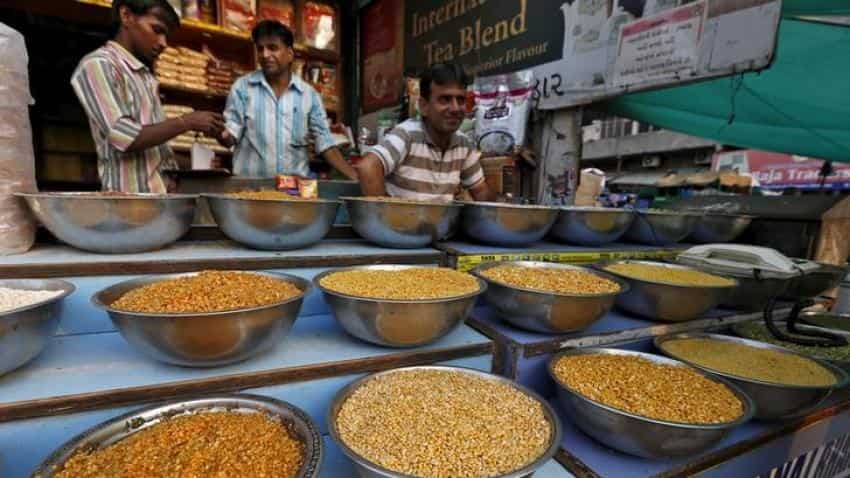 Pulses are kept on display for sale in a shop at a market in Ahmedabad. Image Source: Reuters
Written By: Reuters
RELATED NEWS

Govt to import additional 90,000 MT pulses to bring down prices

India's production of summer-sown pulses is likely to surge to a record high this year, dragging down prices of the protein-rich food grains after last year's sharp rally that prompted farmers to increase area under cultivation, industry officials said.

Higher output by the world's top consumer and importer of pulses could help Asia's No 3 economy rein in its headline inflation that hit a near two-year high in July on double-digit annual increases in prices of sugar, vegetables and pulses.

"Prices have been moderating and in some pulses they could halve from the peak due to bumper production," said Pravin Dongre, chairman of the India Pulses and Grains Association.

He estimated India's output of summer-sown pulses at a record 7.8 million tonnes (MT) this year, up 40% from a year ago. The government has not yet issued an official forecast.

The price of pulses - such as green, black and red gram - hit record highs earlier this year after back-to-back droughts curbed output in 2015. But in the past few weeks, prices have softened with ample rains prompting farmers to cultivate more.

"I have reduced area under cotton to cultivate pulses on more area," said Sukhdev Nathu Mali, a farmer from Jalgaon district of western state of Maharashtra.

As of September 2, India's area under summer-sown pulses reached a record 14.2 million hectares, up 33% from a year ago, with the market already reflecting the expected bumper supplies.

"New season supplies of moong (green gram) have started and prices have fallen below the minimum support price (MSP)," said Nitin Kalantri, a miller in the western state of Maharashtra.

Prices of other pulses could fall below the MSP once supplies roll in from the new season crop, he said.

India fixes the MSP based on production cost and makes purchases if prices drop below the government-fixed rate.

Rising imports are also expected to drag on prices.

"Canada and Australia are set to harvest record crops. They are consistently reducing prices," said a Mumbai-based importer.

India, which consumes nearly 22 million tonnes of pulses annually, sources yellow peas and lentils mainly from Canada and the United States (US), chickpeas from Australia and Russia, and green gram and pigeon peas from Myanmar.

"It is necessary to protect Indian farmers from cheaper imports. Otherwise, next year they will shift to other crops and again prices will rally," Kalantri said.

Govt to import additional 90,000 MT pulses to bring down prices