India and the US are to sign around five pacts during President Donald Trump's maiden visit to India next week, boosting counter-terror cooperation, deepening engagement in the Indo-Pacific region, augmenting defence and trade ties and India's concerns over H1B visas are expected to figure in talks. 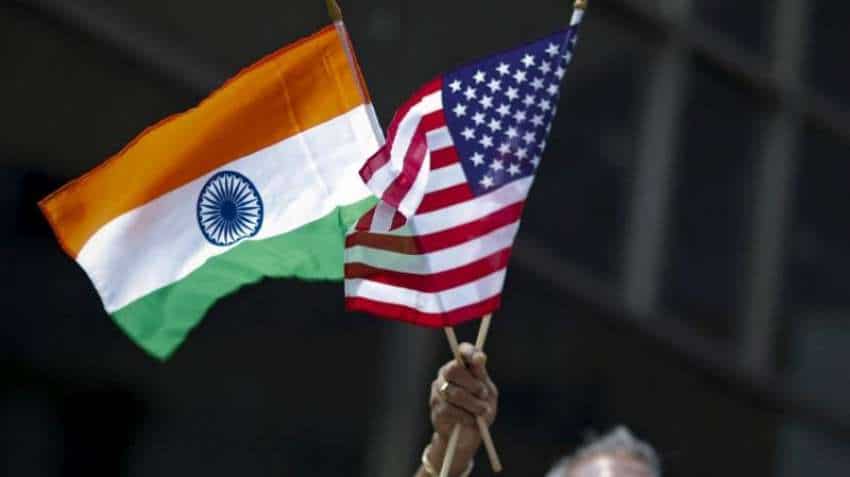 Cabinet Committee on Security approved two big ticket deals -- one on procuring 24 MH-60 Romeo helicopters at a cost of USD 2.6 billion and six AH-64E Apache helicopters for USD 800 million from the US. Photo:Reuters
Written By: PTI
RELATED NEWS

India and the US are eyeing to sign around five pacts providing for cooperation in areas of intellectual property rights, trade facilitation and homeland security during President Donald Trump's maiden visit to India next week, the External Affairs Ministry said on Thursday.

"India is eagerly awaiting President Trump's visit and it will strengthen the bilateral global strategic ties," he said.

Trump, accompanied by wife Melania Trump and a high-level delegation, will arrive in Ahmedabad on February 24 for a little less than 36-hour-long trip. From Ahmedabad, he will travel to Agra before arriving at the national capital for the main leg of the visit.

"Overall, our global strategic partnership will be further strengthened," Kumar said, when asked about the expected outcome of the visit.He said around five MoUs are under discussion for finalisation during the US president's visit. The pacts will cover intellectual property rights, trade facilitation and cooperation in areas of Homeland Security.

On Wednesday, the Cabinet Committee on Security approved two big ticket deals -- one on procuring 24 MH-60 Romeo helicopters at a cost of USD 2.6 billion and six AH-64E Apache helicopters for USD 800 million from the US.

Both the deals are expected to be sealed during Trump's visit.

Kumar said there could be some announcements on expanding defence cooperation during the visit by the US president.

Asked whether India will raise the issue of cross-border terrorism during the talks, Kumar said strong counter-terror cooperation between the two countries was evident after the Pulwama attack last year.When asked about the expected outcome of Trump's visit, Kumar said it should be seen in the context of reaching a certain stage of maturity in the relationship.

Asked about the status of civil nuclear cooperation between the two countries, he said US firm Westinghouse and Nuclear Power Corporation of India Ltd (NPCIL) are in discussion to build six 1,100 MW capacity reactors at Kovvada in Andhra Pradesh.

"Following resolution of Westinghouse's bankruptcy issues, the two sides are in discussion regarding the division of responsibility of the work. NPCIL has visited the US reference plant to understand Westinghouse's modular construction methodology," Kumar said.

Asked about possible cooperation in the area of space, he said the two sides are cooperating in Mars exploration, heliophysics, and human spaceflight.

"On commercial front, ISRO has launched 209 satellites from the US, on-board PSLV, as co passengers. ISRO and NASA are together building a microwave remote sensing satellite with dual frequency (L and S band) Synthetic Aperture Radar," he said.

The MEA spokesperson said ISRO is also working with US government agencies for cooperation in safety of spaceflight through exchange of situational awareness information.

Asked about the US President's comments, Kumar said it is important to understand the context in which the remarks were made.

The context was balance of trade and efforts have been made to address concerns, he said.