India will host the 2022 G20 Summit, President Ram Nath Kovind today during his address to the joint sitting of both houses of Parliament in the historic Central Hall today. 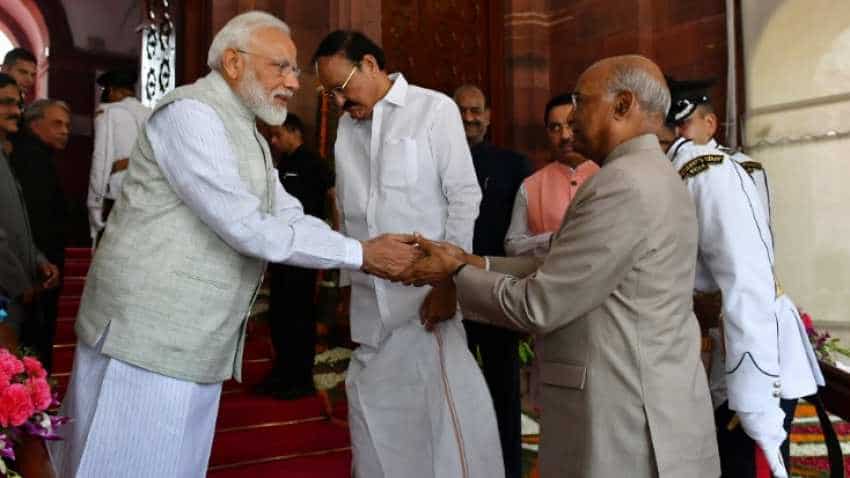 India will host the 2022 G20 Summit, President Ram Nath Kovind today during his address to the joint sitting of both houses of Parliament in the historic Central Hall today. President Kovind talked about the goals PM Narendra Modi-led Union government aims to achieve in the next five years. "New India is rapidly moving towards occupying its rightful place in the world community. Today, India has acquired a new image and our relations with other countries have become stronger. It is a matter of pleasure that in 2022, India will host the G-20 Summit," the President said. He also said that the government will make zero-tolerance policy towards corruption more expansive and effective.

- President Kovind said the government will build a transport system with emphasis on speed, security and environment and will also work to make rivers like Cauvery, Periyar, Mahanadi, Narmada and Godavari pollution free.

- Under Pradhan Mantri Mudra Yojna', about 19 crore loans have been disbursed for self-employment. An effort will now be made to cover 30 crore people by expanding this scheme. A facility for entrepreneurs to avail loan up to Rs 50 lakh without any guarantee will also be introduced.

- Today India has joined the league of countries with most number of start-ups in the world. To improve the start-up ecosystem, the Government is simplifying the rules. Our goal is to establish 50,000 start-ups in the country by 2024

- My Government is striving to increase the number of seats in the country's Higher Education System by one-and-a-half times by 2024. With this initiative, 2 crore additional seats would be available for the youth in higher education institutions

- India is now on the way to become the world's 5th largest economy in terms of GDP. To maintain the high growth rate, reform process will continue. It is our objective to make India a 5-trillion dollar economy by 2024

- The campaign against black money will be taken forward at a faster pace. During the last two years, 4,25,000 Company Directors have been disqualified and the registration of 3,50,000 suspicious companies has been revoked

- With the implementation of GST, the concept of 'One country, One tax, One market' has become a reality.  Efforts to further simplify the GST will continue -

- The facility of ‘One Nation, One Card’ has been launched to realize the dream of seamless mobility

- Under the ‘Direct Benefit Transfer’, funds from more than 400 schemes are being directly credited into the accounts of beneficiaries. During the last five years, Rs 7,30,000 crore have been transferred through DBT

- Insolvency and Bankruptcy Code is among the biggest & most impactful economic reforms undertaken in the country. With coming into force of this Code, banks and other financial institutions have been able to settle directly or indirectly an amount of more than Rs 3,50,000 crore

- The impact of ‘Real Estate Regulation Act’ or RERA is clearly visible in curbing black money transactions in real estate sector and protecting the interests of the customers; providing  huge relief to the middle class families

- The ‘Fugitive and Economic Offenders Act’ has proved effective in controlling fugitive economic offenders. Now we are receiving information in this regard from 146 countries, including Switzerland.

- The New India, will move forward towards that  ideal state of Gurudev Rabindra Nath Tagore, where the mind of the people is without fear and the head is held high with self-esteem. In Gurudev's words: "Chito Jetha Bhay-Shunno, Uchcho Jetha Shir"

- Today, India is second in the world in fish production. Our country has the potential to attain the first place. There is immense potential for increasing the income of farmers through marine fish industry & inland fisheries. That is why the Govt is committed to ‘Blue Revolution’.

- The President said a new industrial policy will be announced soon and the process to further simplify GST will continue.