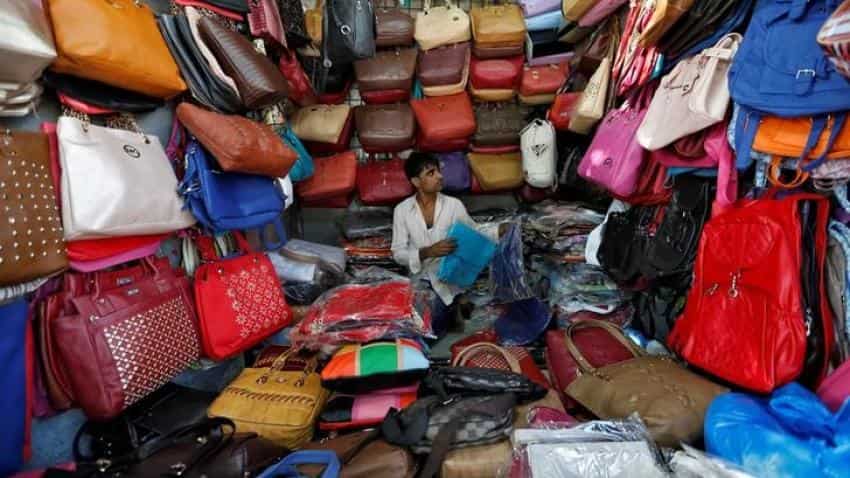 A vendor arranges bags as he waits for customers at his shop at a market in Mumbai. Photo: Reuters
Written By: Reuters
RELATED NEWS

India`s inflation is seen climbing to within touching distance of the Reserve Bank of India`s 4 percent medium-term target in March, driven by higher food costs, a

Having sunk to its lowest level for at least five years in January, consumer price inflation is expected to have risen to 3.98 percent last month from February`s 3.65 percent, according to the median forecast of 30 economists.

The March inflation rate is due to be released at 1200 GMT on April 12.

"In March, cereal and pulses eased but perishables were up. Adverse base effects will underpin the fuel and commodity related components, though the sharp rupee gains will help cap imported price pressures."

Signaling its worries about inflation, the Reserve Bank of India surprised markets last week in raising the secondary reverse repo rate by 25 basis points to 6.00 percent. It kept the key policy repo rate unchanged at 6.25 percent.

India`s central bank raised its inflation projections for the 2017-18 fiscal year starting April, expecting the index to average 4.5 percent in the first half and 5.0 percent in the second, taking it above the RBI`s medium-term target.

Such an uptick in prices could force the RBI, which ended a long easing cycle in February by changing its policy stance to neutral from accommodative, to raise interest rates for the first time in over three years.

That is in contrast to a recent Reuters poll in which economists indicated borrowing costs would more likely fall than rise.

According to that poll, any cut would come towards the end of the year, by which time there would be a clear indication of whether India had a good monsoon, crucial in a country where most of the population depends on agriculture and which will keep food inflation in check.

Wholesale price inflation is expected to have slowed last month, to 5.98 percent from 6.55 percent in February, according to Tuesday`s poll.

Industrial output is seen rising 1.3 percent in February from a year ago compared to 2.7 percent in January, the poll found.