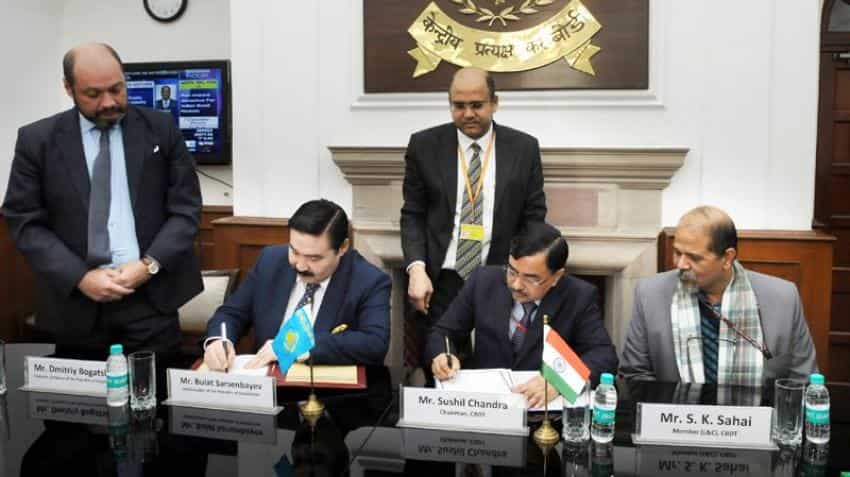 "The information received from Kazakhstan for tax purposes can be shared with other law enforcement agencies with authorisation of the competent authority of Kazakhstan and vice versa," the statement said. Image Source: PIB India/Twitter
Written By: PTI
RELATED NEWS

India and Kazakhstan on Friday signed an agreement to amend the two-decade old bilateral tax treaty under which information exchanged between the two can be shared with other law enforcement agencies.

The protocol to amend the existing Double Taxation Avoidance Convention (DTAC) between the two countries provides internationally-accepted standards for effective exchange of information on tax matters, an official statement said.

"The information received from Kazakhstan for tax purposes can be shared with other law enforcement agencies with authorisation of the competent authority of Kazakhstan and vice versa," it added.

The initial DTAC between India and Kazakhstan was signed on December 9, 1996, for avoidance of double taxation and prevention of evasion with respect to taxes on income.

The revised tax treaty will provide for a Limitation of Benefits clause to prevent misuse of DTAC. It would help allow application of domestic law and measures against tax avoidance or evasion.

"This is a taxpayer-friendly measure and is in line with India's commitment under the Base Erosion and Profit Shifting (BEPS) Action Plan to meet the minimum standard of providing Mutual Agreement Procedure (MAP) access in transfer pricing cases," the statement read.

The protocol also includes service permanent establishment (PE) provisions with a threshold and also provides that the profits to be attributed to PE will be determined on the basis of apportionment of total profits of the enterprise.