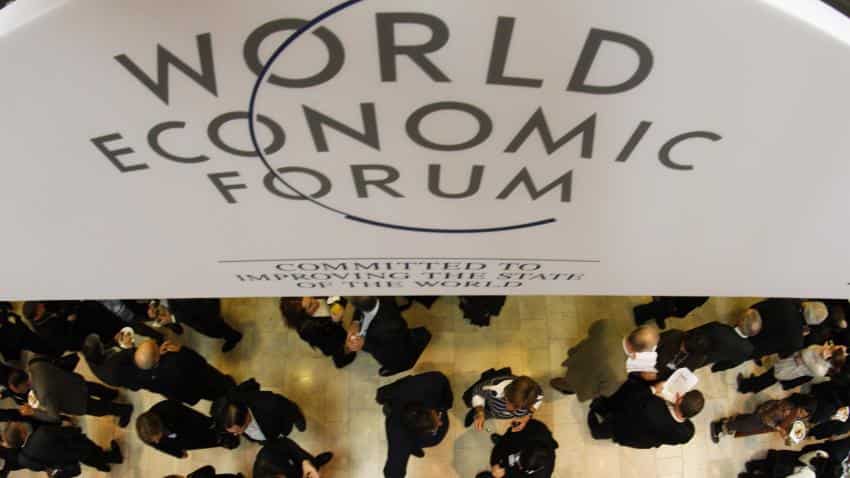 As per the report, India's biggest relative weakness today is in technological readiness. Photo: Reuters
Written By: Hitisha Jain

India climbed 16 places to rank 39th among the 138 countries on the Global Competitive Index of the World Economic Forum (WEF).

WEF said that India's performance was due to improved monetary and fiscal policies as well as lower oil prices. The Indian economy has stabilised and now boasts the highest growth among G20 countries, it said in the report.

As per the data released by WEF, South Asia continued its upward trend in most economies in the region, which has experienced positive growth momentum and in this year (2016) these economies is set to grow faster than China for the first time in more than 20 years.

This slow down indirectly helped the country to rethink about its policies and engage more firmly in reforms to improve its competitiveness. The result was seen in 2014, when India's growth rebounded, surpassed that of China and became the fastest-growing large emerging market in that year.

What made India climb up the ladder?

According to the report, India's competitiveness rank was stagnated for seven years between 2007-2014, and the economy slipped down the GCI rankings.

The trend can be seen in across the sectors. Giving examples, the report said, "Health and basic education improved throughout the decade. Improvement in infrastructure, by contrast, was small and faltering during most of the period, but picked up after 2014 when the government increased public investment and sped up approval procedures to attract private resources."

Apart from this, the institutional environment deteriorated until 2014 with the mounting governance scandals saw businesses losing trust in government and public administration. But, as per WEF, this trend was reversed too after 2014. 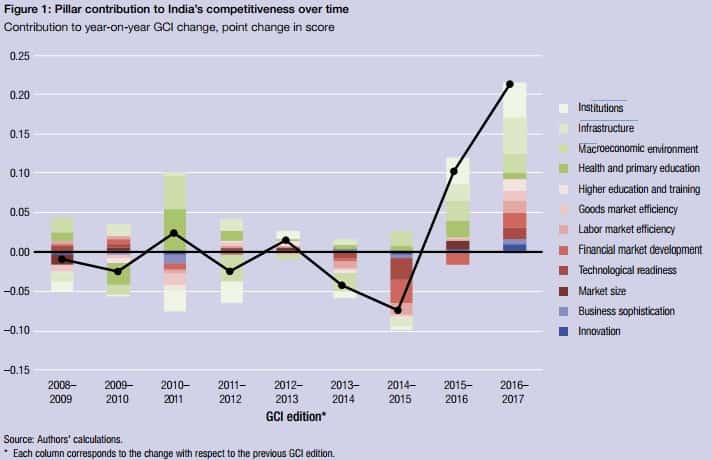 The financial markets, which was dragging down the competitiveness of the country for the past 10 years, but for the current situation, WEF gave credits to the Reserve Bank of India's efforts to increase the transperancy and shed light on the large amounts of non-performing loans, previously not reported on the balance sheets of Indian banks.

"The efficiency of the goods market has also deteriorated, resulting from India’s failure to address long-running problems such as varying goods and services tax (GST) levels within the country, which is set to finally change as of 2017 if the Central GST and Integrated GST Bills currently in Parliament are fully implemented", the report added.

As per the report, India's biggest relative weakness today is in technological readiness, where initiatives such as Digital India could lead to significant improvements in the next years.

On indicators, India has made progress comparing with other countries, Although life expectancy has increased, for example, it is still low by global standards, with India ranking only 106th in the world; and while the country almost halved infant mortality, other countries did even better, so it dropped nine places this year to 115th. Huge challenges still lie ahead on India’s path to prosperity.

"Finally, lack of infrastructure (68th) and  information and communication technologies (ICT) use (120th) remain bottlenecks. Improvement has been slow in recent years and further investment will be necessary, especially to connect rural areas and make sure they can equally benefit from and contribute to the country’s development", the report said.

Switzerland topped the list as it set a record in GCI despite mounting political tensions.

Singapore and the United States stayed in second and third place. The Netherlands overtook Germany for fourth place, while Sweden in sixth spot and Britain in seventh leap-frogged Japan, Hong Kong and Finland.

"Switzerland arguably possesses one of the world's most fertile innovation ecosystems, combining a very conducive policy environment and infrastructure, academic excellence, an unmatched capacity to attract the best talent, and large multinationals that are often leaders in their sector as well as a dense network of small- and medium-sized enterprises," WEF said in its report.