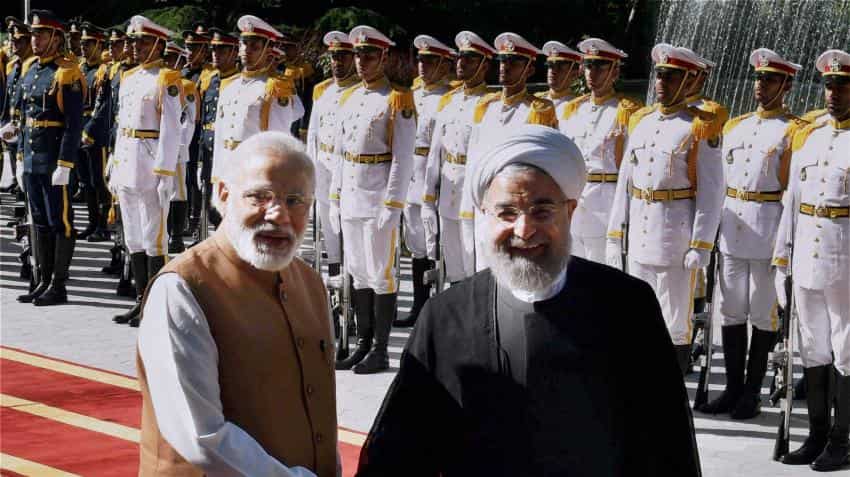 India and Iran on Monday, the second day of Prime Minister Narendra Modi`s official visit to this Persian Gulf nation, signed 12 agreements, including three on development of the Chabahar port for enhanced connectivity.

A bilateral contract on the Chabahar port between India Ports Global Pvt. Ltd. and Arya Bandar of Iran envisages development and operation for 10 years of two terminals and five berths with cargo handling (multipurpose and general) capacities.

A memorandum of understanding (MoU) was signed between India`s Exim Bank and Iran`s Ports and Maritime Organisation for a line of credit from India of $150 million to develop the Chabahar port.

A confirmation statement was also signed between the Exim Bank and the Central Bank of Iran for availability of credit of up to Rs.3,000 crore for the import of steel rails and implementation of the Chabahar port project.

These apart, agreements were also signed in the areas of science and technology, culture and railways.

An MoU between the external affairs ministry and Iran`s ministry of foreign affairs seeks to create a joint secretary/director general policy dialogue as well as encouraging new institutional mechanisms between think tanks on both sides.

Another agreement was signed to extend the cultural exchange programme between the two countries for the period 2016-2019 covering the areas of culture and arts, radio, TV, mass media and cinema.

An MoU between the Foreign Services Institute of the external affairs ministry and the School of International Relations of Iran`s ministry of foreign affairs is intended to enhance cooperation between the two parties for training of diplomats and exchange of eminent speakers.

An MoU between the Indian Council for Cultural Relations (ICCR) and Islamic Culure and Relations Organisation (ICRO) of Iran provides for institutional mechanisms for cooperation between ICCR and ICRO and lays down the modalities for cooperation.

An MoU between the Export Credit Guarantee Corporation (ECGC) of India and the Export Guarantee Fund of Iran (EGFI) seeks to establish a framework of cooperation between ECGC and EGFI in supporting and encouraging foreign trade and foreign investment between India and Iran and, where appropriate, the supply of goods and services from their respective countries as part of a project to a third country.

The objective of another MoU signed between India`s Nalco and the Iranian Mines and Mining Industries Development and Renovation Organisation is for the two parties to jointly explore the possibility of manufacturing aluminium metal by setting up of a smelter on joint venture basis in Iran and/or entering into tolling arrangements with smelters in Iran or any other form of business collaboration including sale of alumina.

An MoU between India`s Ircon and Iran`s Construction, Development of Transport and Infrastructure Company (CDTIC) will enable Ircon to provide requisite services for the construction of Chabahar-Zahedan railway line which forms part of the transit and transportation corridor in the trilateral agreement between India, Iran and Afghanistan to be signed later on Monday.

Services to be provided by Ircon include all superstructure work and financing the project which will be around $1.6 billion.

The aim of a 12th MoU between the National Archives of India and the National Library and Archives Oirganisation of the Islamic Republic of Iran is to facilitate exchange of information and knowledge in the field of archival matters through exchange of manuals, guidelines, rules, publications and other special literature on archival topics.