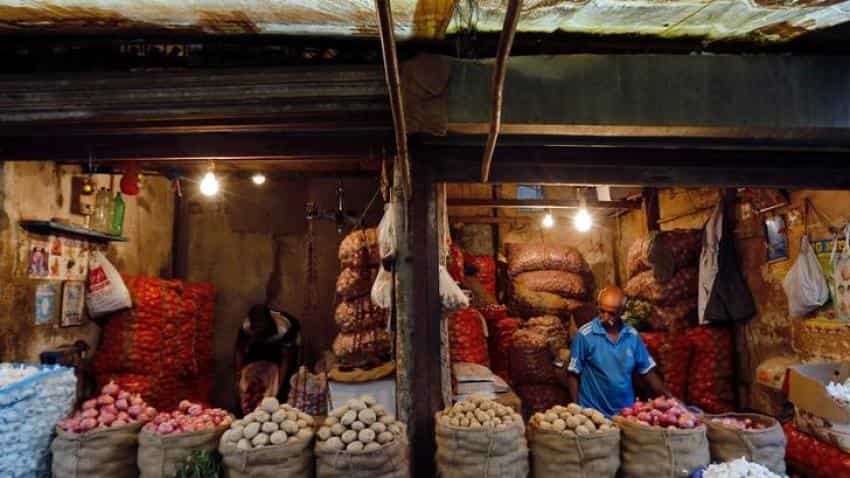 Vendors wait for customers at vegetable stalls at a wholesale fruit and vegetable market in Mumbai. Pic: Reuters
Written By: Reuters
RELATED NEWS

India's consumer inflation is expected to have slowed to a record-low in June, pressured by a sharp drop in food and oil prices, a Reuters poll showed, a result that could intensify calls for an interest rate cut.

Consumer price inflation is predicted to cool to 1.70% in June, easing further from May's 2.18%, according to the poll of more than 30 economists taken over the past week.

If realised, it would be the lowest level since the series began in 2012 and below the Reserve Bank of India's (RBI) medium-term target of 4.0% for an eighth successive month. Core inflation, however, has remained stubbornly above 4% since at least 2015.

"Inflation is expected to take a downturn on account of deflationary pressures witnessed in vegetables and pulses amid slowdown in fuel prices," said Himanshu Varshney, research analyst at AK Capital.

Food and beverage price index, which accounts for nearly half the consumer price index basket, is forecast to contract 1.05% in May, a significant turn from a peak in July last year when it rose 8.35%.

The India Meteorological Department (IMD) said last week that the nation's cumulative rainfall between June 1 and July 2 was 6% above the long-run average.

The RBI kept its benchmark interest rate unchanged in June while softening its hawkish stance following a drop in retail inflation, as predicted in a Reuters poll.

"It would be foolhardy to totally rule out a rate cut given that inflation is likely to be close to or below the lower bound of the RBI's target range," said Shilan Shah, economist at Capital Economics.

Looking ahead, the RBI is watching out for the inflationary impact of the goods and services tax (GST), which came into force on July 1, though food products were exempt from taxes under the new system.

Wholesale price inflation is expected to have slowed last month to 1.60% from 2.17% in May, which would be the lowest since May last year.

Separately, industrial output is expected to have risen 1.9% in May after growing 3.1% in April due to weaker performances in manufacturing, mining and power generation.

The Nikkei India Manufacturing Purchasing Managers' Index, compiled by IHS Markit eased to a four-month low of 50.9 in June on weak demand.

A poor factory output number on Wednesday could further bolster the case for an RBI rate cut next month to boost Asia's third-largest economy, which grew 6.1% in the January-March quarter, its weakest pace in more than two years.