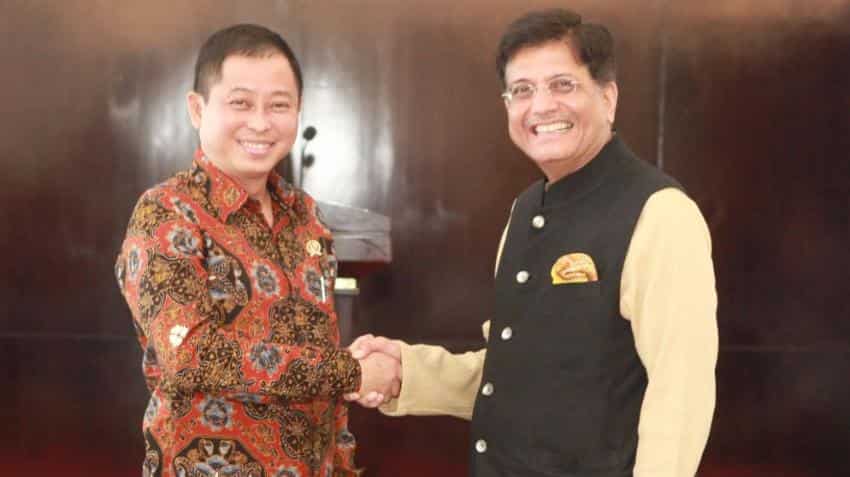 Minister of State for Power, Coal, New and Renewable Energy and Mines Piyush Goyal meets the Minister of Energy and Mineral Resources of the Republic of Indonesia Ignasius Jonan, during the "India Indonesia Energy Dialogue" in Jakarta. Photo: IANS
Written By: PTI
RELATED NEWS

"Two sides have agreed to explore cooperation in number of areas such as upgrading of refineries in Indonesia, relocation of gas-based plants from India to Indonesia, sharing of experience in use of LEDs and renewable energy in India, sharing the expertise of Indonesia in gasification of fuel oil, exploration of oil, gas and coal fields," Goyal said.

Jonan said Indonesia is an important destination for investing, especially in energy and infrastructure sector.

He added that a team of 19 officials from oil and gas, coal and power sectors will be visiting India to look into several issues discussed during the Energy Forum, including relocation of gas-based plants and large scale use of LEDs.

A Memorandum of Understanding between the Ministry of Petroleum and Natural Gas and the Ministry of Energy and Mineral Resources (Indonesia) on cooperation in the field of oil and gas was signed on the occasion.

The MoU seeks to establish an institutional framework to facilitate and enhance bilateral cooperation in the field of oil and gas.

Several Indian companies have invested in coal mines in Indonesia. The bilateral trade between the two countries stood at $15.90 billion in 2015-16 with Indonesia?s export to India amounting to $13.06 billion and India's exports to the country at $2.84 billion.