india is facilitating external commercial borrowings (ECBs) by startups in order to encourage innovation and promote ease of doing business. 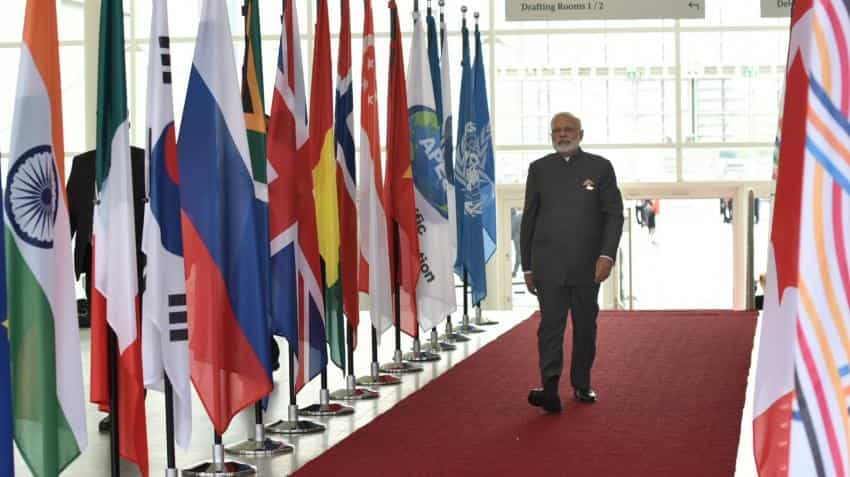 Prime Minister Narendra Modi comes out of the venue after the conclusion of the 12th G-20 Summit in Hamburg, Germany on July 8, 2017. Photo: IANS
Written By: PTI
RELATED NEWS

Acknowledging steps being taken by India for sustainable and inclusive growth as well as support to global economy, the G20 has praised the initiatives in the country for promoting ease of doing business, startup funding and labour reforms.

In its Hamburg Action Plan, adopted at the G20 Summit of leaders from the world's 20 largest economies, the group also noted that "in the financial sector, India is popularising a number of derivative instruments in exchanges or electronic trading platforms" as part of measures to enhance resilience of its economy.

It further said India is facilitating external commercial borrowings (ECBs) by startups in order to encourage innovation and promote ease of doing business, as part of the efforts being taken by the G20 members this year for maintaining momentum on structural reforms and sustainable growth.

On steps being taken by G20 countries for promoting inclusive growth this year, the Action Plan said India is introducing labour market reforms to provide security to workers, increase female participation in the workforce and make doing business easier in the country.

The acknowledgement from the G20 Summit, which was attended by Prime Minister Narendra Modi among other world leaders, assumes significance in the wake of India trying hard to improve its global ranking for ease of doing business.

The World Bank ranked the country at a low 130th position last year, an improvement of just one position from the previous year.

The Modi government has said it wants India to be ranked in the top-50 nations in terms of ease of doing business. The next update to the ranking is expected later this year.

The areas where India ranks poorly as per the World Bank ranking include starting a business, dealing with construction permits, registering property, paying taxes, trading across borders, enforcing contracts and resolving insolvency.

The country has implemented a spate of reforms in the recent months in areas like insolvency, taxation and starting a business and expects the rankings to improve substantially.

The acknowledgement of various reform measures by G20, whose members include 19 countries and the European Union, has come as the latest boost to hopes for better ranking for India in terms of ease of doing business.

Global institutions like the World Bank, IMF, WTO, OECD, ILO, WHO and the Financial Stability Board (FSB) are among the partners to the G20.

The G20 Hamburg Action Plan, which sets out the group's strategy for achieving strong, sustainable, balanced and inclusive growth, also said that the closer partnership and action by G20 members will boost confidence and contribute to shared prosperity.

It said the Action Plan has been developed against a backdrop of improving growth and job prospects.

"The global economic recovery is progressing and gaining momentum. Investment has picked up, and trade and manufacturing are showing signs of recovery. However, the pace of this growth is still weaker than desirable, and downside risks remain.

In the action plan, the G20 members resolved that they will continue to use all policy tools monetary, fiscal and structural individually and collectively to achieve the goal of strong, sustainable, balanced and inclusive growth, while enhancing economic and financial resilience.

The members committed to use their fiscal position flexibly and in growth-friendly way to prioritise high-quality investment, and support reforms, while ensuring debt as a share of GDP is on a sustainable path.

They also reinforced their commitment to structural reform and acknowledged that excess volatility and disorderly movements in exchange rates can have adverse implications for economic and financial stability.

The G20 leaders also committed to refrain from competitive devaluations and said they will not target their exchange rates for competitive purposes.

The G20 leaders said their growth strategies -- individually and collectively -- will boost global growth, including an increase of an additional 2 per cent for the G20 collective GDP by the next year.

The 13-page action plan took note of various steps being taken by the member countries including on monetary policy and enhancing resilience of the respective economies.

It also said China is improving its business environment and utilising foreign investment actively, while the European Union is fostering investment with a proposal to extend the European

Investment Plan and increasing the overall flexibility of the EU budget to support job creation, investment and economic growth

On promoting inclusive growth, the Action Plan noted that the inequality within many countries had increased until the mid-2000s and the member countries are introducing further measures this year to promote inclusive growth and raise the living standards of all their citizens.

It also said that the malicious use of Information and Communication Technologies (ICT) could disrupt financial services crucial to both national and international financial systems, undermine security and confidence and endanger financial stability.

On taxation, it said the G20 will continue to work for a globally fair and modern international tax system and welcome international cooperation on pro-growth tax policies.

It also called on all jurisdictions to sign and ratify the multilateral Convention on Mutual Administrative Assistance in Tax Matters.

Terming the multilateral convention as an important tool in fight against corruption, tax evasion, terrorist financing and money laundering, the G20 said it will advance the effective implementation of the international standards on transparency and beneficial ownership of legal persons and legal arrangements.